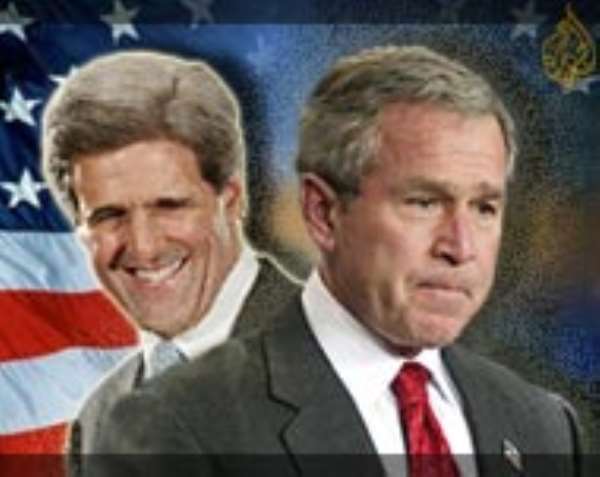 A majority of people in 30 of 35 countries want Democratic party flagbearer John Kerry in the White House, according to a survey released Wednesday showing US President George W. Bush rebuffed by all of America's traditional allies. On average, Senator Kerry was favored by more than a two-to-one margin -- 46 percent to 20 percent, the survey by GlobeScan Inc, a global research firm, and the local University of Maryland, showed. "Only one in five want to see Bush reelected," said Steven Kull, the university's program on international policy attitudes. "Though he is not as well known, Kerry would win handily if the people of the world were to elect the US president." The only countries where Bush was preferred in the poll covering a total of 34,330 people and conducted in July and August were the Philippines, Nigeria and Poland. India and Thailand were divided. The margin of error in the survey covering all regions of the world ranged from plus or minus 2.3 to five percent. Kerry was strongly preferred among all of America's traditional allies, including Norway (74 percent compared with Bush's seven percent), Germany (74 percent to 10 percent), France (64 percent to five percent), the Netherlands (63 percent to six percent), Italy (58 percent to 14 percent) and Spain (45 percent to seven percent). Even in Britain, where Prime Minister Tony Blair is Bush's closest ally in the war on terror, Kerry trounced the incumbent 47 percent to 16 percent.
Kerry was also greatly favored among Canadians by 61 percent to Bush's 16 percent and among the Japanese by 43 percent to 23 percent.
Even among countries that have contributed troops to Iraq, most favored Kerry, and said that their view of US foreign policy has gotten worse under Bush.
They included Britain, the Czech Republic, Italy, the Netherlands, the Dominican Republic, Thailand, Kazakhstan, Japan, Norway and Spain.
Asked how President Bush's foreign policy had affected their feelings towards the United States, a majority of those polled in 31 countries said it made them feel "worse" about America, while those in only three countries said it had made them feel "better."
"Perhaps most sobering for Americans is the strength of the view that US foreign policy is on the wrong track, even in countries contributing troops in Iraq," said GlobeScan President Doug Miller.
In Europe, the exception for Bush was a new ally, Polland, where he was preferred by a narrow majority of 31 percent against Kerry's 26 percent.
Another new European ally, the Czech Republic, however went for Kerry (42 percent to Bush's 18 percent) as did Sweden (58 percent to 10 percent).
Asia was the most mixed region, though Kerry still did better. Aside from enjoying a large margin in Japan, he was preferred by clear majorities in China (52 percent to Bush's 12 percent) and Indonesia (57 percent to 34 percent).
But those polled were divided in India (Kerry 34 percent, Bush 33 percent) and Thailand (Kerry 30 percent, Bush 33 percent).
Latin Americans went for Kerry in all nine countries polled. In only two cases did Kerry win by a large majority -- Brazil (57 percent to 14 percent) and the Dominican Republic (51 percent to 38 percent) -- but in most cases the spread was quite wide.
Bush was preferred in Nigeria with 33 percent as compared to Kerry's 27 percent but the Democratic candidate was favored in five other African states polled -- Kenya (58 percent to 25 percent), Ghana (48 percent to 24 percent), Tanzania (44 percent to 30 percent), South Africa (43 percent to 29 percent) and Zimbabwe (28 percent to six percent).
Strongest negative views on US foreign policy were held in Germany, with 83 percent of those polled saying "worse" followed by France (81 percent), Mexico (78 percent), China (72 percent), Canada (71 percent), Netherlands ( 71 percent), Spain (67 percent), Brazil (66 percent), Italy (66 percent), Argentina (65 percent) and Britain (64 percent).