The One-month Noise Ban For Homowo Is Taken Too Far 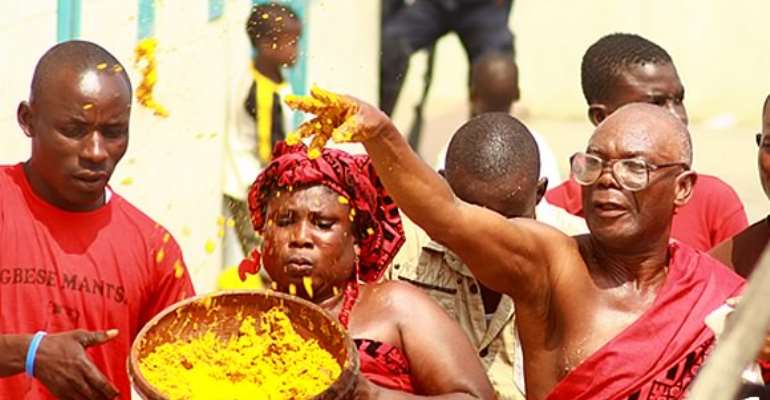 Hear oh hear our Ga Traditional Council that flouting their one-month ban on noisemaking with the recent Dumsor vigil and an earlier Banku-Powers boxing match caused the June 3 twin disaster! Why, is it the latest policy of their gods or it is the norm that perpetrators would go scot-free for others to bear their wrath, or are the victims relatives of the organisers?

Well, if it were true then I would have problems with their gods for wrong diagnosis, or deceit or both. If on the other hand this is not the proclamation of their gods then the Ga Traditional Council should be cautious of exposing itself to ridicule. Even if this intimidating one-month ban on noisemaking for Homowo is worth its salt then it would be realised that the combined noise of at a vigil and a boxing match would not match that of an airplane taking off or landing, the lot of generators providing light because of Dumsor, industrial machines, security traffic siren, etc. that are allowed to operate. These would not bother their gods or the Ga Traditional Council because the ban is more an avenue for unjustified show of power by a minority.

If the gods have to be angry about anything, then it should be for the usual sale of a piece of land to many innocent buyers then employing land-guards to settle the the problem caused in a "survival of the fittest" method. Also, the dumping of refuse into drains to choke them and at backyards to be washed into the heavily silted Korle Lagoon which include Gas it represents. Meanwhile, I am yet to know of any educational or desilting program the Council has supported so far for the multiple flood disasters Accra over the years. Considering that it is this very Council or individuals Gas that sells lands in Accra, it sounds almost wicked for it to say what it said when it is the sellers that know better which areas are in waterways yet sell them to unsuspecting buyers during the dry season!

As the "Landowner/Landlord" even in a city that is the Nation's capital and seat of the Government of Ghana, acquired for that purpose since 1877 (when it was moved from Cape Coast), if the Council has shown a little positive practical interest in solving the Accra floods, they could have contributed towards it by now rather than forcing non-adherents of their religion annualy to participate in their celebrations. An example of "positive practical interest" is what the petrol company Shell did for Accra fishermen, as its corporate social responsibility in the late nineties, when it provided the Bukom fish landing-site with a cold storage facility to curb the perennial losses during bumper catch and attendant low fish prices and wastage.

The Ga Traditional Council cannot be blamed for the twin flood-and-fire disaster of June 3 because it has no hand in it. In same vein, nobody is expecting it to either compensate, donate to or even sympathise with the victims, but connecting the disaster to the flouting of their unreasonable one-month ban on noisemaking is hitting the nation below the belt. It must be noted that it would be equally unreasonable for any traditional group in Ghana to make orders in any government-acquired area as the Akosombo and Bui Dams, the Universities, a reservation, etc, even as the local people may have their work-free days on a river/lake/sea/land etc. Also in contrast, the other religions do not force anyone to celebrate their festivals to the extent of stopping their work for a month! Though sounding rather blunt, it is about time we started to face such bitter truths as a nation, to help our forward movement towards development.