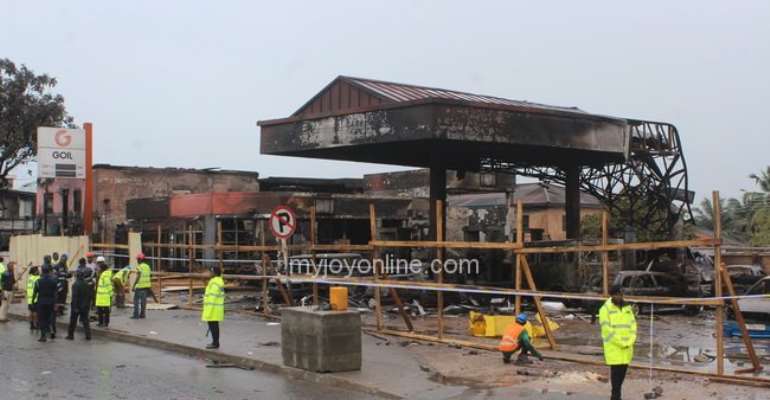 The five-man committee tasked to investigate the flood and fire disasters which killed more than 150 people at the Kwame Nkrumah Circle has been touring the disaster site Friday morning.

The visit is to enable the team gather more information on the deadly incident.

Joy News’ Latif Iddrissu who is with the committee members said some preliminary findings have been made.

As part of the preliminary investigations, water was said to have been found in one of the tanks containing diesel.

It is not clear how that may have contributed to the disaster and committee members have been tightlipped on the findings, Iddrisu reported.

On June 3, over 150 people lost their lives in an explosion at the Goil Filling Station close to the Kwame Nkrumah Circle.

Many of the victims were people who had taken shelter under the Filling Station following hours of torrential rain which got many of the surrounding areas flooded.

Eyewitnesses claim there had been some leakage from some petrol tanks at the filling station which mixed up with the flood water.

It is not clear who or what sparked the flame which subsequently culminated into the explosion.

The Filling Station was reduced to ashes; men, women, babies charred beyond description.

Three days of national mourning was announced with President John Mahama constituting a five-man committee to investigate the cause of the fire.

The Committee chaired by a Retired Appeals Court Judge, Mr Justice Isaac Douse has members drawn from, Ministry of Defence, the Ghana Police Service and the Ghana National Fire Service as well as a hydrologist Consultant, Mr Wise Ametepe

The Committee is expected to complete its work on June 30, 2015.