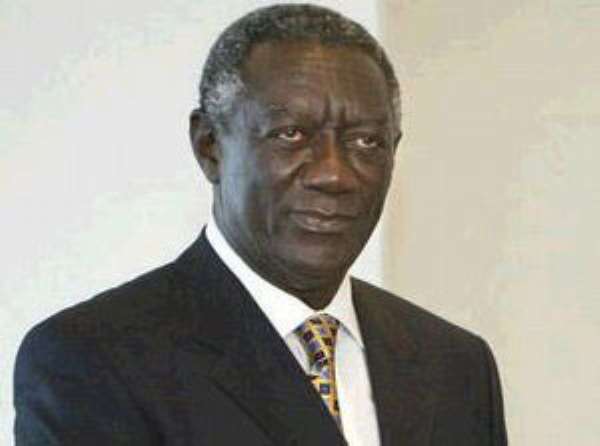 Accra, Sept 5, GNA - President John Agyekum Kufuor on Sunday called on Ghanaians to respect each other and to make that mutual respect the cornerstone to build a more disciplined and tolerant society. He stated that as true democracy deepened, individual freedoms increased and said that in Ghana there had been a new era where freedom of speech, the press and movement was the norm.

"What we must not overlook is the fact that these freedoms come with their own inherent obligations, the most important of these being the need to accord to others the same rights that we demand for ourselves.

"We must as a nation commit to respect one another and to use that mutual respect as a cornerstone to build a more disciplined and tolerant society," he said.

President Kufuor made the call when he addressed the Eight-day International Prophetic Conference of the Christ Apostolic Church (CAC) International at the Trade Fair Site in Accra.

The Conference under the theme " Prayer: A Divine Medium for Changing Events" was an annual event by the Church for fasting and praying for the nation and to uplift the souls of the congregation.

The Church with a membership of over 500,000 has 2,000 branches in Ghana with 550 Pastors. It also has some branches outside Ghana. President Kufuor said the canker of indiscipline was evident on the country's streets, workplaces and homes, adding, "We must arrest this trend".

President Kufuor said a return to discipline would mean an improvement in the lifestyles of the people to make their surroundings more clean and hygienic to improve the general health of the people, which would automatically improve productive levels to achieve national objectives.

He said counsel of the Church and support of individuals and institutions including the Government would help to generate a new sense of discipline and work ethic to propel the country towards its goal of a prosperous and a happy nation.

President Kufuor called on the Church to help set the pace for the development of a more tolerant and focused society.

He said the Church while ministering to the spiritual as well as the secular needs of the people must always be conscious of the high expectations of the society.

"We expect leaders of our Churches to show the way in curbing excessive materialistic tendencies, they must try to achieve a positive balance between the spiritual and material needs of society. If we can achieve this balance, we will be developing a well-rounded and more stable society," he said.

President Kufuor commended the Church towards the spiritual development of society and its contribution to the socio-economic advancement in many areas.

He appealed to the Church to pray for God's guidance and direction in the 2004 election and to bless the country with peaceful and fair elections to realise its destiny as God's own country of peace, democracy, prosperity and freedom and justice for its people. Apostle Michael Nimo, Chairman of the Church, in a sermon said God had given the power to Christians to change any spirit or power against mankind on earth.

He said it was the Church's avowed aim to pray for God's guidance to restore all the good tidings that had eluded the nation's prosperity and development.