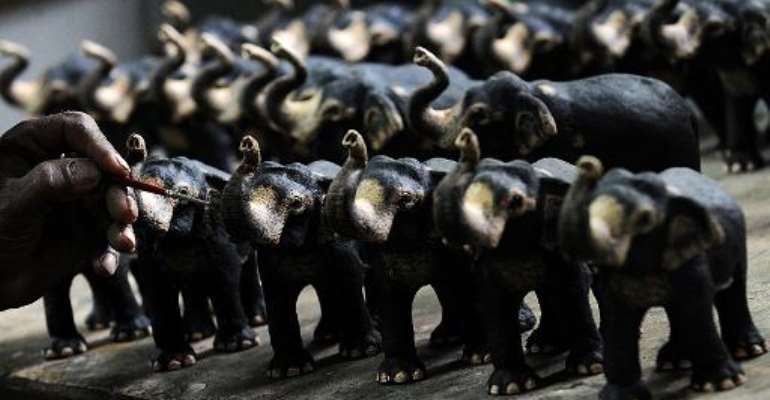 A Sri Lankan artist paints an elephant sculpture made from elephant dung in the village of Pinnawela, some 90kms north-east of Colombo, on July 24, 2013. By Ishara S. Kodikara (AFP/File)

Miami (AFP) - Scientists can now match DNA from elephant dung to DNA extracted from ivory to track down the source of large, illegal shipments of tusks and trinkets across borders, researchers say.

Experts hope the methods will lead to a crackdown on wildlife crime in two main hotspots in Africa where the vast majority of the killings take place.

The illegal trade fuels the killing of some 50,000 African elephants each year and results in 40-50 tons of seized ivory.

Much of the demand for ivory comes from Asia, where it is carved into signature seals, jewelry, cigarette holders and other trinkets, making big profits for traffickers.

The two hotspots were identified as southern Tanzania and northern Mozambique, followed by the Tridom protected ecosystem that includes parts of Gabon, the Democratic Republic of Congo, southeast Cameroon and the southwestern Central African Republic.

"This is a major transnational organized crime," said co-author Samuel Wasser from the University of Washington.

"By identifying these major focus hotspots, this prevents countries that are involved in this trade from denying the extent of their involvement, and it also allows the international community to collaborate together to work with these countries to stop this trade, and to stop the major flow of ivory moving into these criminal networks."

Time is of the essence because there are only about 470,000 African elephants remaining, and about one-tenth of the population is being lost each year to poaching.

For the study, researchers analyzed 28 ivory seizures made between 1996 and 2014.

Each stockpile contained a half ton of tusks or more.

To trace the roots of the ivory, scientists took dung samples from 1,350 elephants, including both savanna and forest elephants, in 71 locations across 29 African countries.

By matching that DNA to the tusks, they created a map that showed where the tusks had come from.

After 2007, they could tell that most savanna elephant tusks came from Tanzania and Mozambique.

Most forest elephant tusks came from Gabon, the Republic of Congo, or the Central African Republic.

Experts have long known about the areas where poaching is taking place, but Bill Clark, an advisor to Interpol, said it is helping law enforcement home in on critical areas in a complicated trade that crosses many international borders.

The research "is helping us to understand the structure and the dynamics of the transnational organized crime syndicates behind it," Clark told reporters on a conference call.

"Looking, finding, identifying the origin of the ivory is helping us piece together that puzzle."

Wasser said he hoped the study would put pressure on African nations to take tougher action against poachers.

"It's going to be much more difficult for them to deny the magnitude of the problem, and it's also going to cause the international community to pull together and just say enough is enough."

Experts also said the same kind of DNA technology and tracking could be used to help catch criminals dealing in other animals, including lions, tigers, leopards and pangolins.

[Hot Video] Shatta Wale vim dies as prisoners hoot at him in...
9 minutes ago