A Night of High-Flying Ghanaian Achievers In Toronto 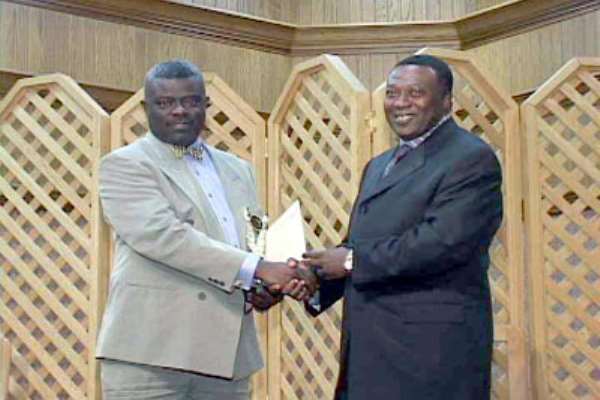 The Furmee Furlane Banquet Hall on Islington Avenue in Toronto was the scene of celebrations, exhortations and warm hugs on Saturday August 28, 2004 as twenty members of the Ghanaian Community and two non-Ghanaians were honored for achieving excellence in their various fields of endeavor. In attendance at the glittering event dubbed as a "Celebration of Excellence", The Fifth Annual Ghanaian-Canadian Achievement Awards Night were over four hundred members of the Ghanaian Community, politicians from various levels of government in Canada, friends of the community and an array of photographers. The 22 high achievers who came from across Canada, Montreal, Oshawa, North Bay, Winnipeg, Ottawa and Toronto were honored in various categories. Four people, Lucy Amadu (Montreal), Jose Aggrey (Ottawa), Samuel Yeboah (Toronto) and Constable Don Yirenkyi (Toronto) were honored in the area of Community Service for their selfless contribution to the development of the Ghanaian community in Canada. Two young people, Richard Adu Bobie (Toronto) and Benard Appiah (Ottawa) were honored for high achievement in Sports, while Dr. John Akabutu, Ghana's Honorary Consul General in Edmonton was honored for receiving a National Canadian Award. Bennet Nyame of New Era Food Mart, Toronto was recognized for his pioneering efforts in Community business. Two persons, Justice Kofi Nkum Barnes and Dr. Ishmael Bruce were honored for professional excellence, while three people, Peter Kumah (Toronto), Philip Otchere and Dr. John Baffoe (North Bay) were honored for high achievement in the academic field. Kwasi Poku, (a.ka. Okyeame Tabiri) was recognized for the promotion of Ghanaian Culture in Canada, and Kobena Acquaah-Harrison for the promotion of African music in Canada while Abraham Konadu (Nana Ebrey) came in for excellence in Video Production. An eight-year old girl, Greda Agyapong was presented and honored as the Community's Young Discovery of the Year, while Comfort Asante was honored for her many years in the production of Gospel Music Samuel Aboagye Danso, long-time resident of Hamilton-Ontario was honored as the Community's Person of the Year for his active participation at various levels of the community's development. A medical doctor, Dr. John Kitakufe, a non-Ghanaian, who described himself as "more Ghanaian than a friend" was honored as a Friend of the Community while another non-Ghanaian, Kathy Knowles from Winnipeg was honored for her work in establishing libraries for children in Ghana. The financial Services Corporation, Western Union Money Transfers was also given a special award for active support for events in the Ghanaian Community in Canada. The Federal Canadian Member of Parliament for Etobicoke Lakeshore and long-time friend of the Ghanaian Community, Hon. Jean Augustine delivered a motivating speech in which she exhorted members of the Ghanaian community to work harder to assume their rightful place in Canadian society. She also exhorted community members and other members of the African Community to work hard to lift Africa from its present low-level of development.