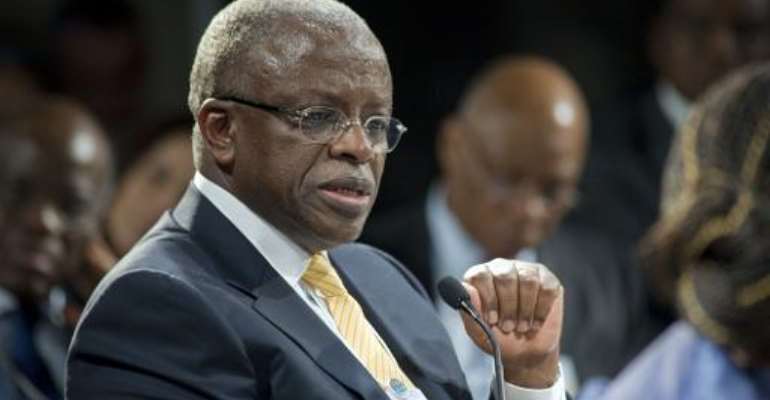 Amama Mbabazi, 66, announced he would challenge his former ally Museveni, for president in elections due next year. By Rodger Bosch (AFP/File)

Mbabazi, 66, announced on Monday he would challenge his former ally Museveni, 70, for president in elections due next year.

Supporters of the former prime minister, whom Museveni sacked in September 2014, took his announcement as a cue to start distributing Mbabazi posters and T-shirts, without permission from the electoral commission.

Four people charged over the posters were jailed after being refused bail by a court in Masaka, some 120 kilometres (75 miles) southwest of the capital Kampala, the Daily Monitor paper reported.

Two others were remanded in jail in Kampala while six others were arrested in the northern regions of Zombo and Arua for similar offences.

"The electoral commission has not yet flagged off campaigns and so it was unlawful," local police chief Jonathan Musinguzi told the Monitor, referring to the arrests in Zombo and Arua.

"We don't have a problem with supporters, but with people who are in conflict with the laws of this country," Enanga said. "The Public Order Management Act is for people to do things peacefully and in a manner that is organised, not just holding demonstrations and blocking highways."

But he dismissed suggestions that posters of Museveni should also be taken down.

"The president is the fountain of honour and he enjoys absolute immunity for whatever actions and enjoys structural advantages," Enanga told the Daily Monitor. "You cannot just pull down his pictures under whatever circumstances."

Museveni has led the east African nation since 1986. He sacked Mbabazi, a former ruling party secretary-general who had been prime minister since 2011, after it emerged that Mbabazi was preparing to challenge him for president.

Mbabazi spokeswoman Josephine Mayanja-Nkangi told AFP he did not "condone abuse of the law on either side, either by my supporters or by the police", but noted Ugandans have the right of "freedom to demonstrate in accordance with the law."