Francisca Oteng Mensah: A Challenge To Gerontocracy Or A Reaffirmation Of Akan Feminism? 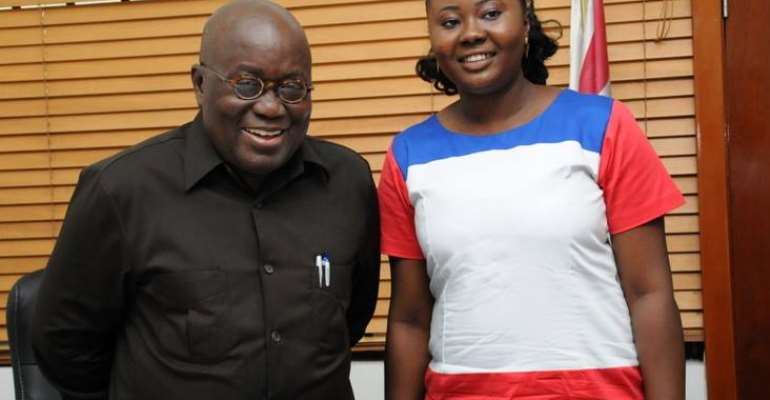 A lot of concerns have been expressed about the possibility of Francisca Oteng-Mensah going to parliament after she won Saturday’s – June 13, 2015 – parliamentary primaries to represent Kwabre East (in the Ashanti Region) on the ticket of the largest opposition party, the New Patriotic Party. For many people she is too young and inexperience. So the questions that some people are asking include the following: what can a 22-year-old second year law student contribute to discussion on the floor of parliament? Has she gone through the political mill to deserve a place in the august house as a parliamentarian? What is her experience in politics? And how mature is she to represent a constituency?

These questions from superficial observation look credible, but crumble helplessly when we test them. These questions portend to certain assumptions, which are in fact false. First, the questions assume that experience is uniform, and can be homogenized or even universalized. Second, the questions also assume that age is a determinant of wisdom. Implicit in the questions is also a patriarchal tendency, which as I will argue was a seed, sowed by western feminists. And lastly, the questions implicitly assume that one has to be groomed by following the long political queue before one can assume a position of leadership.

To alienate the youth from leadership, the refrain has always been that, ‘the youth are the future leaders.’ Usually, such clichés reflect gerontocratic and atavistic feelings of what some wrongly refer to us African tradition. Is it true that traditional African societies, with focus on the Akan, was gerontocratic? Among the Akan were there not possibilities for the youth to rise to occupy political office? Was age used as the benchmark to determine wisdom? Among the Akan was age the only means used to determine social maturity? Was the door to political leadership closed to the youth in Akan political system? How relevant was social maturity in determining the person most qualified to be a leader?

Their mission was to study so-called primitive cultures in order to pave way for the colonialists to strategize how best to colonize Africans. And to rationalize the so-called civilizing mission, African culture had to be presented in a very pessimistic terms with all the negative and derogatory terms that could be used to describe it.

It must be stated that Western feminists writing about African women were informed by unquestioned racism and cultural imperialism. Just as racism was read into African-European relationship in the 19th Century, racism was again read into the relationship between African women and white women. Based on social evolution, African women are perceived to be at the lower end of the social hierarchy. The Western woman is projected as civilized and liberated, while the African woman is presented as irredeemably backward and in desperate need of redemption from Western feminists. Indeed, Western feminists rationalize the negative projection they had assigned to the African woman through their deployment of social Darwinism.

While I accept that there were some cultural practices that potentially undermined the dignity of the woman in some African societies, I agree with the Nigerian anthropologist, Oyewumi Oyeronke, that cultural practices such as polygyny, bridewealth, and female genital circumcision, have usually been taken out of their cultural milieu by Western feminist anthropologists to claim that African women are victimized and helplessly enslaved.

So, why did western anthropologists present the African women as helplessly marginalized by society? First, Western feminists have always assumed that African culture is frozen in time and history. Thus, while dynamism is part of the attributes of culture, African culture is usually presented as unchanging and inflexible. Second, Western culture is projected as the judgment bar against which the civility or primitivism of a particular culture is determined. So, any cultural practice that does not conform to Western culture is considered barbaric and backward. Third, there is tweaking and twisting of some cultural practices of Africa to support the position of Western feminists.

Francisca’s chances of going to parliament should be supported. Her victory should not be seen as an affront to gerontocracy. It should not be seen as a challenge to androcentric tendencies. It should be accepted as a resurgence of feminism in the Akan society. The queen-mother (Ohemaa from the expression, Ohene a oye obaa, to wit, ‘a Chief who is a female) was very important in Akan traditional politics. The advent of the ‘white’ in the interior of the Akan society heralded the erosion of the powers of the Ohemaa. So, we should see Francisca’s victory as a reassertion of the role of the female in the Akan politics.

The greatest man ever in history, Jesus Christ, impacted the world when He was still young and active. Others like Mohammed bin Abdullah, Alexander III of Macedon, popularly known as Alexander the Great, Moses, the Jewish Messiah, and a host of others created a space for themselves in history while they were still young. The Akan political system had the Nkwankwaahene, and he was very influential in politics. The Akan, also among other African cultures, have a proverb that says that, ‘if the child knows how to wash his hands well, he eats with elders.’ Thus, in the Akan social system, space is created for youngsters to express their potentials.

I, therefore, submit that the idea that the youth are future leaders is a baseless myth, a myth that is meant to alienate the youth from participating in managing society. There is no future for anyone: Life is here and now, so let the youth of Ghana arise to challenge gerontocracy. I end with a text from the bible: ‘Great men are not always wise; neither do the aged understand judgment’ (Job 32:9).