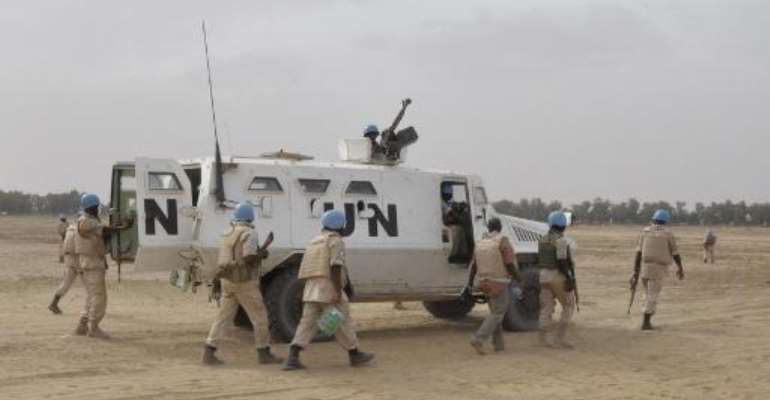 UN peacekeepers patrol on May 12, 2015 in Timbuktu. By Alou Sissoko (AFP/File)

The force has suffered the largest losses among the UN's 16 missions worldwide, and is regularly targeted by militants in the country's restive north.

"I possess some good assets but overall we have some major shortfalls that make us extremely vulnerable," said MINUSMA commander Major General Michael Lollesgaard.

The Danish general said that gaps in intelligence, as well troop training, safety and supplies were of major concern.

Since the mission's deployment in 2013, 36 soldiers have died and more than 200 have been wounded, making it the deadliest mission since Somalia in the 1990s.

MINUSMA peacekeepers have been killed in suicide attacks, ambushes and mortar fire on their bases.

Lollesgaard himself was part of a convoy in late May that came under attack, in an incident claimed by Al-Qaeda in the Islamic Maghreb (AQIM).

"Because of insufficient pre-deployment training, I believe we have had losses that could have been avoided," Lollesgaard said.

"Many of my troops are not good enough at these basic skills."

He pointed to weaknesses in identifying landmines or calling for help from helicopters to evacuate the wounded.

Closer contact with the local population and better protection, whether out on patrol or on the base are also key.

"We also should provide well protected camps with good living conditions," he said.

Lollesgaard criticized the UN's use of private carriers to supply MINUSMA troops.

"North of the Niger River, the hostilities are so imminent and the road conditions are so poor that it is irresponsible to keep on going there with old fragile civilian trucks that are unprotected and driven by people that are not soldiers," he said.

Teachers Are Better Off Under NPP Than NDC — Education Minis...
57 minutes ago