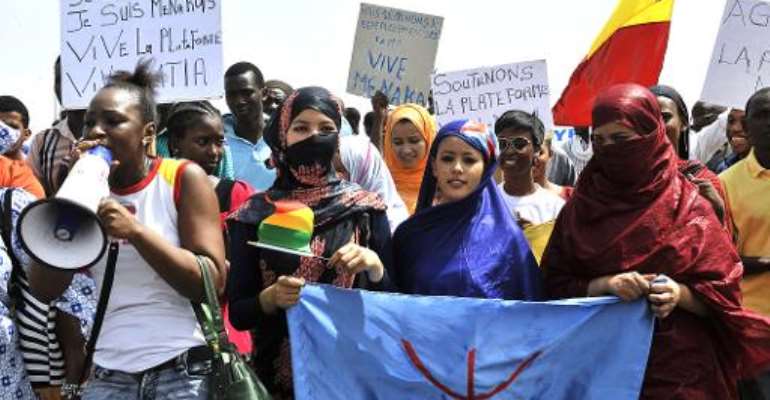 Bamako (AFP) - Loyalist militias are refusing to withdraw from a flashpoint town in northern Mali, they said Wednesday, violating a condition for the rebel alliance's commitment to the country's fragile peace process.

The fighters seized Menaka from the volatile west African country's Tuareg-led rebel alliance in April, in an operation which has sparked several violations of a ceasefire agreement, leaving many dead on both sides.

"In front of UN officials in Mali, the people, the prominent citizens of Menaka, asked us to keep our troops in the town for their safety, so we are staying," said Me Harouna Toureh, a spokesman for a coalition of pro-government armed groups from the north known as the Platform.

A source in MINUSMA, the United Nations peacekeeping mission, confirmed Menaka is "still occupied by armed groups supporting the government of Mali".

"Peacekeepers are also within the city, and the Malian army," the source said on condition of anonymity, adding that fighters from the rebellion, known as the CMA, were dug in about 30 kilometres (20 miles) from the town.

The CMA is due on Saturday to sign the Algiers Accord, a deal hammered out over months under the auspices of the UN, to bring stability to northern Mali, already rubber-stamped by the government and loyalist armed groups.

Toureh denied the decision to stay in Menaka would jeopardise the process, adding that "our rebel brothers understand the situation".

CMA spokesman Almou Mohamed demanded however that "in accordance with the commitment made in Algiers, militias of the Malian army in Menaka must leave the city, and let the UN mission ensure the safety of the people".

He said the CMA would begin internal consultations, if the Platform did not quit the town, to decide if Saturday's signing ceremony was to go ahead.

The MINUSMA source said however it was still on course "until we hear different".

The CMA won a number of concessions as a condition for giving its backing to the Algiers Accord, including a stipulation that its fighters and other combatants be included in a security force for the north, and for residents of the north to be represented in government institutions.

A "security arrangement" mandating the departure of pro-government forces from Menaka was another key concession agreed by all sides.

Mali was shaken by a coup in 2012 that cleared the way for Tuareg separatists to seize towns and cities of the vast northern desert.

Al-Qaeda-linked militants then overpowered the Tuareg, taking control of northern Mali for nearly 10 months until they were ousted in a French-led military offensive.

But the country remains riven by ethnic conflict, with the Tuareg and Arab people of the north accusing sub-Saharan groups in the more prosperous south of treating them as second class citizens.

Be strong — Isaac Adongo consoles Bawumia with a cow for mot...
52 minutes ago