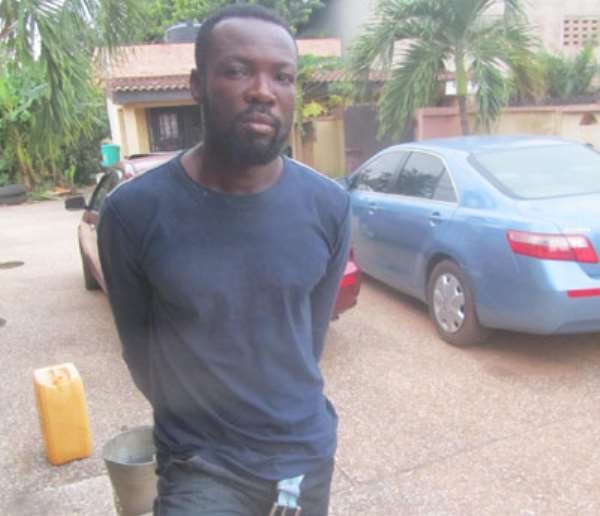 Omane Boateng in police custody.
Police in Sakumono are keeping in custody a 29-year-old man who allegedly steals moneys from customers who patronize Western Union Money Transfer at the HFC Bank on the Spintex Road in Accra.

The suspect, Omane Boateng, a resident of Odorkor Official Town, Accra, is said to be a self-styled businessman who had on several occasions robbed customers of the bank for some time now.

He reportedly enters the banking hall under the pretext of transacting business and secretly picks the control and code numbers of customers which he texts to someone elsewhere who quickly cashes the money the bank customer intends to withdraw.

Deputy Superintendent of Police (DSP) Frederick Lumor, Crime Officer of the Sakumono District Police, posited that recently management of the bank had been receiving several complaints about monies stolen from the customers who had been transacting business on Western Union Money Transfer.

According to him, all efforts to track down the perpetrators had proved futile, although the Close Circuit Television (CCTV) cameras at the banking hall had captured those behind the crime.

On June 8, 2015 at about 8:30 am, the police officer maintained, when the HFC bank was opened to the public for business to commence, the suspect, who had been captured by the CCTV cameras to be the brain behind the crime, also entered.

The Police Crime Officer indicated, 'What the suspect usually do is that he picks a form as if he was filling it and stands close to someone who is filling a form to transact business on Western Union Money Transfer.

'He then secretly takes the control and code numbers on the person's form and texts them to one of the members of his gang who goes to other banks to withdraw the amount.'

On the day of his arrest, DSP Lumor asserted, the suspect picked a form as usual, under the pretext of transacting business, adding that he was immediately identified by the management of the bank who alerted the policeman on duty.

Suspect Boateng, sensing danger, quickly took to his heels but he was pursued and arrested after which he was handed over to the police for further investigations.

The suspect, according to the Crime Officer, admitted the offence and stated among other things, that he, together with one Wofa Yaw and Haruna, had conspired to steal from customers of the bank.

However, it is believed that the suspect has an insider at the Western Union office who quickly withdraws monies on control numbers sent by Omane.