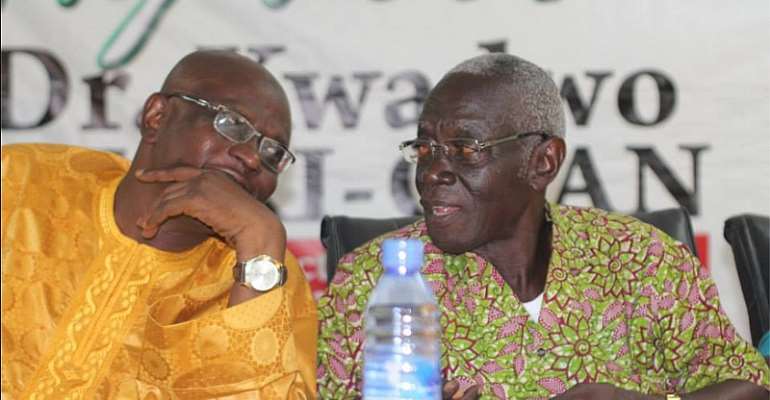 The Chairman of the Electoral Commission (EC), Dr Kwadwo Afari-Gyan, early yesterday morning took a graceful bow from the commission when he met the staff to bid them farewell at a brief durbar.

While sources at the EC would neither confirm nor deny the exact date of his official exit from the commission, they were also scant with information on the brief durbar.

But it is known that June this year is his exit period.

The durbar was organised without much fanfare and behind closed doors.

The Ghanaian academic, political scientist and election administrator chalks 70 years on Thursday, June 18, 2015. At this age, he is statutorily required to retire from his position because that position is equivalent to a Court of Appeal judge who retires at age 70. Bowing out

Already, Dr Afari-Gyan has personally dropped hints that he will not be at the helm of affairs to supervise next year's elections.

'I'm retiring next year, way before the next general election will be organised,' he had told participants at a consultative forum on Public Elections Regulations [CI 75] in Kumasi late last year. Sterling performance

His sterling performance over the years has not been in doubt, as he has held the position of executive secretary of electoral bodies globally.

He was part of the commission that conducted the 1992 elections, as he was a deputy commissioner to the then chairman of the then Interim National Electoral Commission (INEC), Mr Justice Josiah Ofori Boateng, along with the late Essumejahene, Nana Oduro Numapau.

But in more recent times, his role at the commission has been called into question by some politicians and some governance experts.

At the 2013 Election petition hearing at the Supreme Court, Dr Afari-Gyan's stewardship came into focus, with a section of the public describing his public pronouncements at the hearing as below par.

Prior to the petition, any challenge to his views on electoral issues had been cheekily met with the refrain: 'You can go to court.'

The EC itself admitted that the 2012 elections were marred by 'unforgiveable' irregularities.

However, President John Dramani Mahama has extolled his virtues and rich credentials as a 'shining example' to Africa’s electoral commissions.

'As President of the Republic, let me, on behalf of the people of Ghana, express our respect for the dedication to work shown by Dr Afari-Gyan. I have no doubt that his place in Ghana's history is assured and he will be dearly missed when he finally retires this year.

'There certainly will be an opportunity for a grateful nation to express its gratitude to an illustrious son of the land who has led a team of dedicated and hardworking men and women over the last 23 years to guide our nation in one of the most delicate aspects of modern democracy — elections,' the President said of Dr Afari-Gyan recently. The man Afari-Gyan

Born at Anyimon in the Brong-Ahafo Region on June 18, 1945, Dr Afari-Gyan was, in 1992, appointed Deputy Chairman of the INEC by the then PNDC government which was ruling the country as a military junta.

With the coming into force of the Fourth Republican Constitution, a new EC was put in place and Dr Afari-Gyan became its first substantive chairman and has remained the electoral body's chairman to date.

He attended Achimota School for his GCE (Ordinary Level) and Adisadel College for his Advanced Level and graduated from the University of Ghana in 1967 with a Bachelor of Arts (BA) degree in Philosophy.

He went on to obtain a Master of Arts (MA) degree in African Politics from the same university in 1969.

He also studied in the United States where he was awarded a Ph.D in Political Science by the University of California, Santa Barbara, in 1974. Career

Afari-Gyan worked as a lecturer and professor in Political Science at the University of Ghana.

He has also lectured in the United States and Nigeria.

He was a member of the Committee of Experts that drafted the Fourth Republican Constitution for Ghana.

He has also worked in a number of African countries and written several books. Publications