The wrong call: Recap of events in Nhyieaso Constituency primaries 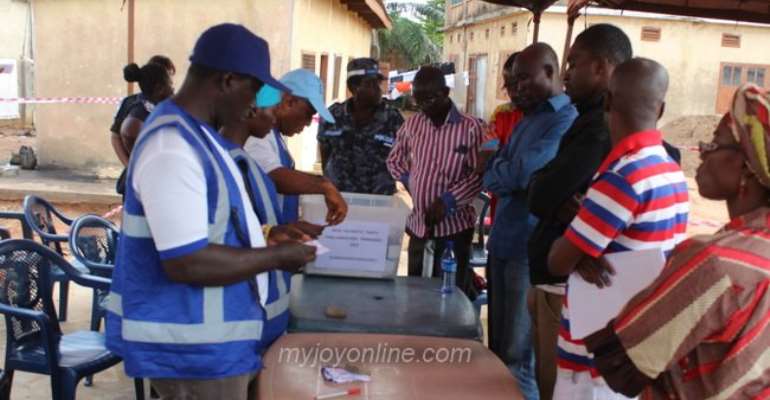 Saturday’s parliamentary primaries of the New Patriotic Party at its election ‘world bank’ Ashanti Region will go down as one of the most memorable events in the party’s history.

The Nhyiaeso Constituency produced not only one of the shocking results but also voting there was nearly marred by alleged over-voting.

Five aspirants, including a former Health Minister as well as Roads and Highways Minister, sought the mandate of delegates to represent the NPP in the 2016 parliamentary poll.

Richard Anane
Five aspirants, including incumbent, Dr.Anane, a former Health Minister, have sought the mandate of the delegates to represent the NPP in the 2016 parliamentary poll.

Dr Anane has occupied the Nhyiaeso seat since 2008. Nhyiaeso was carved out of the once vast Bantama Constituency - then known as Ghana’s Florida.

Political pundits had tipped Dr Anane, who has nearly 20 years experience as a legislator, to win against relatively unsung opposition candidates.

A fifth aspirant, the only female, Awa Abdul Aziz, withdrew at the eleventh hour to throw her weight behind Dr. Anane.

“Going around and meeting with my delegates, I have seen that I have to step down and then support Dr [Richard Anane] for a brighter future”, she explained.

552 delegates were expected to decide the fate of the four gentlemen for presentation to the over 50,000 registered voters in the constituency for 2016.

Dr.Anane and Mr. Appiah-Menkah took their seats calmly as proceeding began, with Stephen Amoah and Kennedy Kankam missing for minutes before they later showed up.

The Banquet Hall of Sunset Hotel, venue for the poll, boiled with excitement and anxiety as counting of ballots began.

Declaration of results was however delayed as aspirants protest what they claimed to be over-voting.

Then came the bombshell from the supervising EC official who did not come with challenge forms.

Speaking in Twi at first, he later changed to English, insisting he didn’t bring Challenge Forms which will enable unsatisfied aspirants to formally challenge the results.

For a solution, the electoral officer suggested angry aspirants file their complaint on ordinary sheets of paper.

The deafening noise from supporters of all aspirants, except those for Kennedy Kankam, will not prevent the EC official from declaring the results which went in favour of the former Regional Organizer.

The other contestants’ aspirants in protest refused to endorse the result as they stormed out the hall in anger after the Returning Officer had appealed to them and their agents to stay.

Mr. Stephen Amoah, one of the aspirants who looked confused over the development claimed the EC official confirmed there was over-voting by two.

“I cannot really provide absolute conclusion that it was rigged’ neither can I also say that it was not rigged. [But] the EC boss himself admitted there was over voting”, Mr Stephen Amoah complained.

He promised to join any action that would be taken by other aspirants to seek justice.

So what does constituency executives make of this development?

Director in Charge of Elections and Research at Nhyiaeso, Frank Essel wants the Electoral Commission to purge itself of what he describes as “elementary mistakes”.

“The Electoral Commission as an institution should sit up and reorganize itself. You cannot continue to make these elementary mistakes and expect somebody who has gone through primaries, pushing a lot of resources in and you expect them to accept your mistakes”, a worried Essel complained.

As a first step, Mr Essel wants the Executive Committee to meet all the aspirants and iron out their differences.