Kenya police accused of abuses against Muslims after massacre 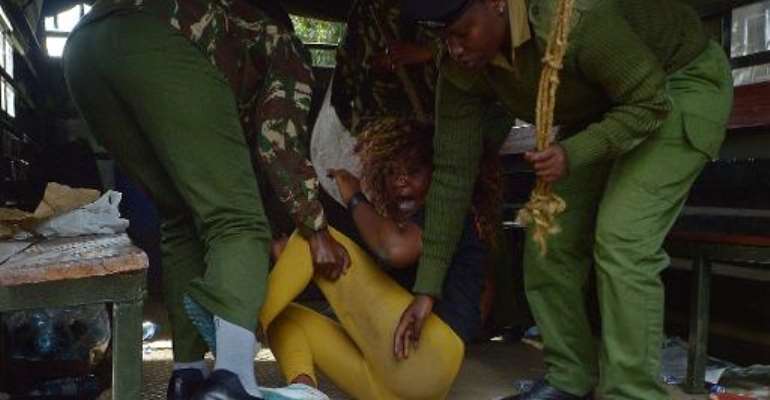 A protester reacts as she is detained by police during a demonstration in Nairobi to demand security reforms in November 2014. By Tony Karumba (AFP/File)

Nairobi (AFP) - The response by Kenyan security forces to a wave of massacres a year ago in Kenya's coastal region has been marked by beatings, arbitrary detentions and theft, human rights groups said Monday.

A report by Human Rights Watch and the Kenya Human Rights Commission said the abuse suffered by the local communities in the wake of the attacks underscores an urgent need for far-reaching security reforms, including increasing their resources and weeding out abusive officers.

Groups of Islamist militants carried out a string of raids in June and July 2014 near Lamu island, a once-popular tourist destination situated close to the border with war-torn Somalia. Close to 90 people died in the violence, according to officials.

The Somali-led and Al-Qaeda-affiliated Shebab rebels claimed responsibility for the attacks, which they said were in retaliation for Kenya's mistreatment of its coastal Muslims, including the alleged extra-judicial killings of several hardline clerics in Mombasa.

On Sunday Shebab militants attacked a Kenyan army base and briefly overran a village, both in Lamu county close to Mpeketoni.

According to the report by the rights groups, Kenyan security forces were slow to respond to last year's massacres, and that when reinforcements did arrive, "their actions were often discriminatory, singling out Muslim and ethnic Somali communities for beatings, arbitrary detention, and widespread theft of personal property."

"People in Lamu and Tana River deserve protection and justice, not further violence after the horrific attacks a year ago," said Leslie Lefkow, deputy Africa director at Human Rights Watch.

"Police should work with local communities to investigate the attacks and ensure that law enforcement operations are free of discrimination and abuse."