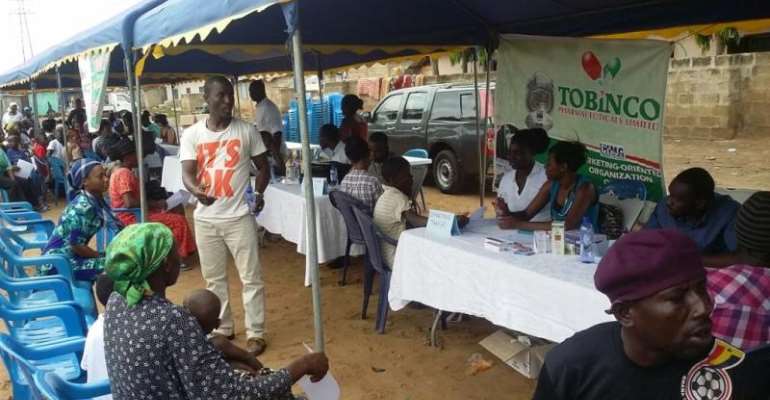 The screening exercise forms part of the Corporate Social Responsibility interventions of Tobinco Group of Companies.

Mrs Millicent Akoto, Executive Director of the Foundation said barely a few days after the disaster, some isolated cases of cholera was reported in some communities in Accra.

She said more frightening was the prediction from experts that more cases of cholera may be recorded if care is not taken.

She said this makes every Ghanaian vulnerable to the possible spread of cholera and other diseases, while the insanitary living conditions goes unabated

'In this vein, the Tobinco Foundation and the TPL called on stakeholders with government as the principal stakeholder to help prevent the occurrences of death and its related problems of diseases,' she said.

She said to forestall sanity and promote development, the foundation and TPL recommends that media houses join campaigns to fight against insanitary conditions.

Government agencies responsible for sanitation and health should ensure behavioural change, and make sure that adequate measure are put in place to keep refuse dumps and water bodies well maintained, whilst market places and lorry parks and stations should be swept regularly.

Mrs Akoto commended the members of the security forces, organisations and individuals who worked tirelessly to save lives during the disaster.

Dr Samuel Antwi, of the 37th Military Hospital told Ghana News Agency that the exercise was an opportunity to reach out to victims of the twin disaster as well as solving their health problems.

He said the exercise should be regularly organised at deprived communities and disaster prone areas.

He therefore commended the Tobinco Foundation and TPL for the gesture.

A beneficiary who spoke on condition of anonymity said: 'It only God who can pay the Tobin Foundation and the TPL for what they are doing for us. I have been complaining of my waist pains since the flood but did not have money to go to the hospital but thank God for this opportunity today.'