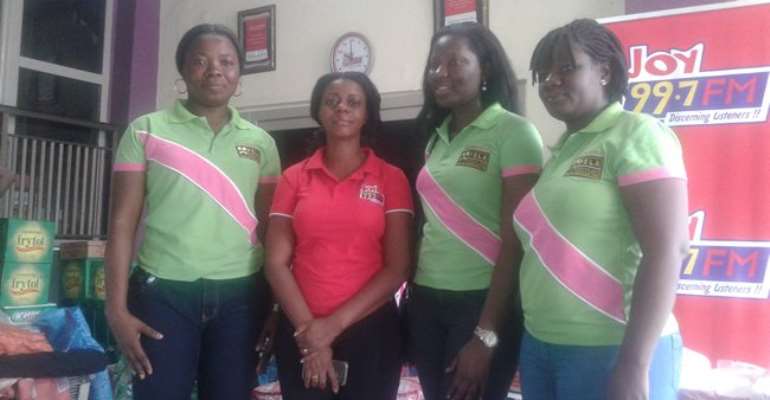 The Petroleum Ladies Association of the Ghana National Petroleum Corporation (GNPC) has supported Joy FM’s drive to help victims of the fire and flood disaster that occurred last Wednesday.

President of the Association, Doe Agboloso Mensah, led a group of to donate boxes of soap, milk, tin tomatoes, packs of toilet rolls and clothes for distribution to the victims.

She said although focus have been on victims at the twin fire and flood disaster at the Kwame Nkrumah Circle, there are victims in other parts of the country that need equal support.

MOGA
The Greater Accra Regional Chapter of the Mfantsiman Old Girls Association (MOGA) also donated a number of items to help the flood and fire victims.

Their presentation included used clothes, two and a half bags of rice, cartoons of Milo, mackerel and tuna as well as cooking oil.

The leader of the team, Ms. Esi Hammond, said the impromptu donation was made prior to the Association’s Meeting this weekend. She said the association would at its meeting plan and organise a special donation but this had to be done to alleviate the plight of the flood and father victims prior to that official meeting

LBFF
The 2011 Group B Class of the Ghana Institute of Management and Public Administration (GIMPA) and the Life Building Family Foundation (LBFF) also made a donation of used clothing, cartons of milk, assorted items and medical supplies to help the victims.

Representatives of the class and NGO, Alfreda and Agnes Adom said they were touched by the plight of the victims and wanted to help in their “own small way.”