Mali rebels explain peace accord to refugees in Mauritania 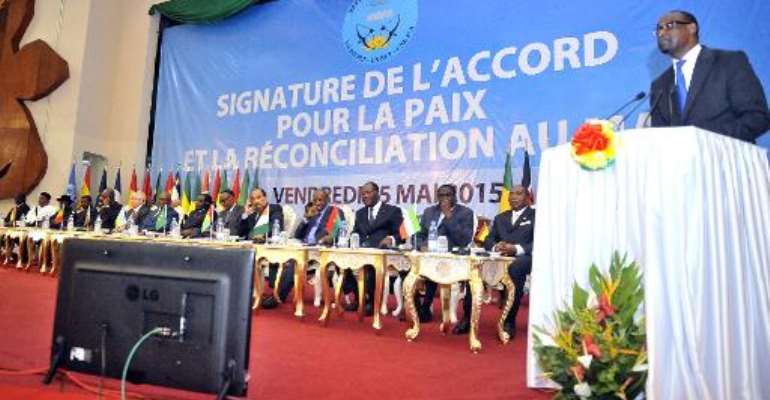 Malian Foreign Affairs Minister Abdoulaye Diop (R) delivers a speech during a ceremony to sign a peace accord between Mali's government and several armed groups on May 15, 2015 in Bamako. By Habibou Kouyate (AFP/File)

Nouakchott (AFP) - Leaders of Mali's Tuareg-led rebel alliance visited Malian refugees in Mauritania on Friday to explain a decision to sign a peace agreement with the government, a member of the delegation said.

The Coordination of Azawad Movements (CMA) -- whose name refers to the country's vast northern desert -- had been holding out but has agreed to commit to the Algiers Accord at a ceremony in Bamako on June 20.

"We have come to the camps in Mauritania after a meeting with the Azawadian diaspora in Nouakchott to tell our citizens why we are signing this agreement, which falls far short of their aspirations," said Mohamed Attaye Ag Mohamed, of the National Movement for the Liberation of Azawad (MNLA), a CMA member.

The CMA won a number of concessions as a condition for giving its backing to the deal, including a stipulation that their fighters and other combatants be included in a security force for the north, and for residents of the north to be represented in government institutions.

"The international community has recognised the relevance of the amendments proposed by the CMA as part of the Algiers Accord," Ag Mohamed told Malians in the Mbera refugee camp in southern Mauritania.

"Even if this should lead us to failure, we have to journey together," he added, calling for the people of northern Mali to unite behind the decision.

The Mbera camp has housed up to 70,000 Malians who fled the north in 2012-13, when Islamists seized control of the region's main towns and cities before being ousted by a French-led military intervention.

The United Nations High Commissioner for Refugees, which runs the camp, says it expects to house 48,000 refugees this year.

The talks at the camp came as several representatives of the rebellion in Europe challenged the decision, however, telling a news conference in Paris it would be rejected by grass roots supporters.

Egles Ag Oufene, vice-president of the Coordination of Azawad Cadres, accused MNLA chief Bilal Ag Acherif of having "buckled" to international pressure, notably from France and the Algerian-led mediation team.

"The agreement does not meet the legitimate concerns of the population," said Moussa Ag Assarid, diplomatic representative of the MNLA in Europe, deploring the absence of federalism or autonomy for the north as part of the deal.

"The signing of the agreement will not be accepted on the ground," he predicted.

Perfidious Asiedu Nketiah and Ofosu Ampofo are imposters in ...
45 minutes ago