RE: Ministerial Directive issued to Management of MODEC Ghana Ltd 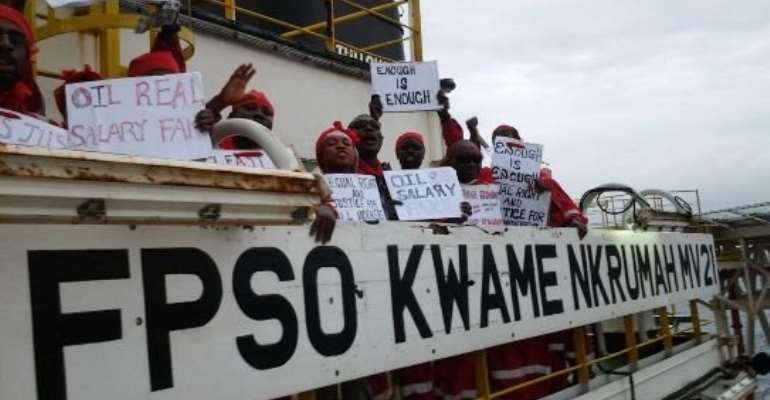 We write as a follow-up to our letter GTPCWU/MODEC/PVOL.3/297 dated 21st May, 2015 on the above subject and wish to inform the Hon. Minister that the Management Committee of the General Transport Petroleum and Chemical Workers' Union of Trades Union Congress (Ghana) having met on Friday, 22nd May, 2015 has taken a decision that the National Chairman in the person of Brother Samuel Quarshie, the Deputy General Secretary in the person of Brother Francis Saliah and Brother Emmanuel Eduah Offoh , a Management Committee member have been mandated by the National Union to spearhead the return of the 18 reinstated workers of MODEC Ghana Limited to the FPSO Kwame Nkrumah in reference to the MOU signed between the stakeholders at the meeting held on 19 th November, 2014.

The Hon. Minister of Petroleum stated "Any matter that government has an interest in should be taken seriously because Government cannot be ridiculed" as government was part of the signed MOU as a very important stakeholder.

We want to restate that these 18 highly skilled technical workers only protested peacefully without causing any danger to the facility even against an extreme provocation by the Management of the facility to push for closing the wide salary gap that exists between the Ghanaian workers and their expatriate colleagues of the same competence, skills and educational level and even sometimes better than these expatriates.

The workers demands were and are still legitimate as the Union deems these demands to be in consonance with the National Laws (extracts attached) and their rights of equality as enshrined in the National Constitution.

BANKERS: Barclays Bank, Avenue Central Accra
If therefore, it is a crime for Ghanaians to work in their own country to be cheated and treated this way then God help us!

It is worth noting that the Management of MODEC Ghana after the 21 st April 2015 meeting with the Hon Ministers ie the Minister of Petroleum and the Minister of Employment and Labour Relations are silent now on the steps being taken to return the 18 workers onto the FPSO Kwame Nkrumah.

The National Union is now consulting our structures ie the rank and file members and if within 2 weeks from the date of this letter ie by 15th June 2015, these 18 workers are not returned to the facility, the National Union will advise ourselves and the National Union should not be blamed for ^ny consequences thereof.

Perfidious Asiedu Nketiah and Ofosu Ampofo are imposters in ...
56 minutes ago