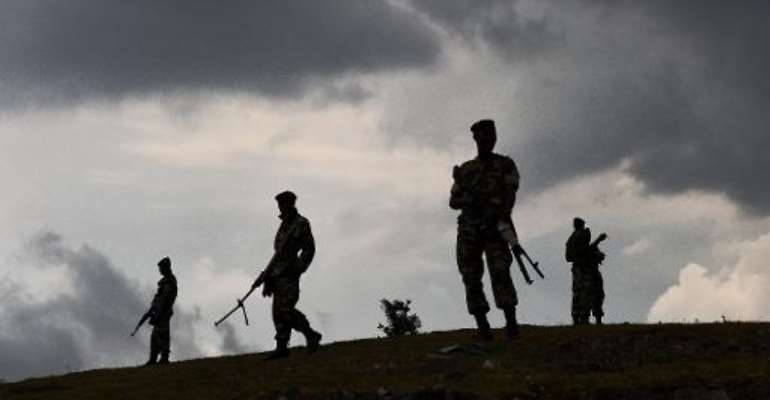 Soldiers stand guard near a house that was set on fire by protesters opposed to the president's bid to stand for a third term in Butagazwa, on June 5, 2015. By Carl de Souza (AFP)

Bujumbura (Burundi) (AFP) - Burundi's government said on Thursday that weeks of protests against a third term bid by the president were over, claiming that the remaining demonstrators were only being organised by journalists.

Opposition leaders however said the protests continued, calling the government claims "pure lies" with now just over two weeks before parliamentary elections are due.

The troubled central African nation has been in crisis since late April over President Pierre Nkurunziza's controversial bid to stand for a third consecutive five-year term, a move branded by opponents as unconstitutional and a violation of a 2006 peace deal that ended 13 years of civil war.s

"There are no more demonstrations in Bujumbura or inside the country," Pierre Nkurikiye, deputy spokesman for the security ministry and police said in a statement, adding that the media were to blame for the remaining pockets of protests.

"It is a movement of some journalists -- especially those sent by the international media -- who... organise groups of people in remote areas, away from police, and ask them to sing, to exhibit placards."

Several journalists who have been covering Burundi's crisis, which has seen weeks of street demonstrations, a violent police crackdown and a failed coup attempt by a section of the army, have complained of being subjected to threats -- including death threats -- by members of the police or other branches of the security forces.

Burundi's domestic independent media has also been largely silenced amid the unrest, with private radio stations attacked and destroyed during the coup attempt.

Meanwhile the United Nations' top envoy for Burundi on Thursday quit as mediator in the crisis, after his role was challenged by civil society leaders, who questioned his impartiality.

Said Djinnit, who continues his role as UN special envoy to the Great Lakes region, appealed to all sides "to refrain from any acts likely to increase tension and violence."

Protesters gathered in some suburbs of Bujumbura on Thursday -- as they have done almost every day since April 26 -- chanting slogans and singing against Nkurunziza's third term bid.

Around 40 people have died in a police crackdown on the protests, and nearly 100,000 Burundians have sought refuge in neighbouring countries. Six were shot and wounded on Wednesday, according to witnesses.

"If there are no more demonstrations, why is it the police fire every morning and every night in Bujumbura's neighbourhoods? Why do we bury people every day killed by the police?" he asked.

The UN this week warned that increasing violence by a pro-government militia, including executions, abductions and torture, was threatening to further destabilise the poverty-stricken, landlocked country.

Rights group Amnesty International said this week that Burundian journalists were operating in a "climate of fear", while Reporters Without Borders said on Thursday that some 50 journalists had fled the country "for security reasons and say it is still too dangerous to go back".

Parliamentary elections are now slated for June 29 and a presidential poll on July 15, after delays due to the unrest.

Burundi's opposition -- which has said that fair polls are not possible because independent media has been shut down and many opponents have fled the country -- have accused the president of trying to force a vote regardless of the crisis.