I will not select runningmate based on religion - Mills 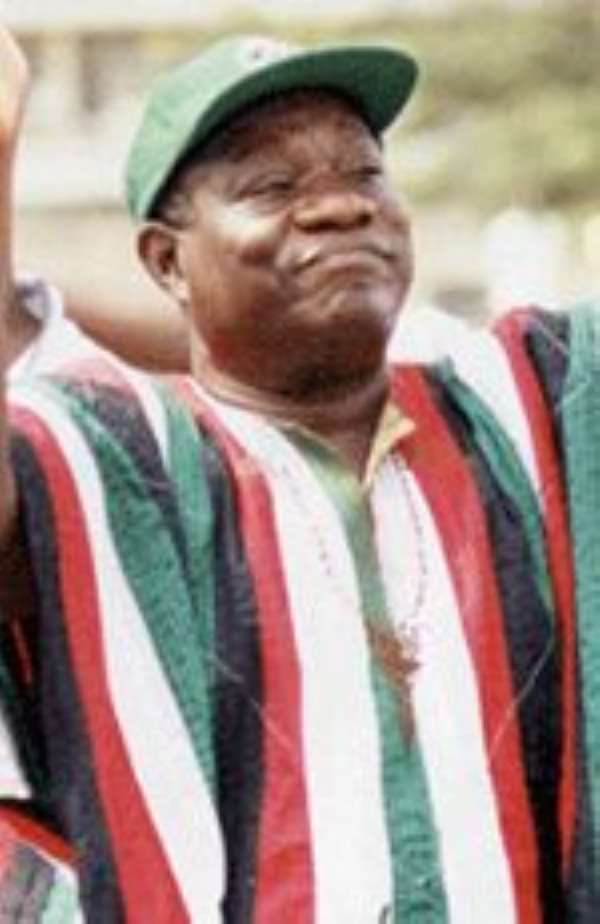 THE PRESIDENTIAL candidate of the National Democratic Congress (NDC), Prof. John Evans Atta Mills, has dispelled the notion of using religion in the selection of his running mate.

According to him, he would not base his choice on ethnic or religious affiliation but would rather select somebody who understood his chemistry and was committed to the work ahead- winning this year's election.

“We are seriously on the ground working. The running mate is not the issue at the moment. I will not select somebody on the basis of religion or any other affiliations but select the one who is committed, dedicated and will help me to win this year's election,” Prof. Mills told The Chronicle in a telephone interview yesterday when the paper sought his views on the running mate controversy that has gripped the party.

The NDC presidential candidate, who recently ended a week's tour of the Brong Ahafo Region and is now touring parts of the Volta region, indicated that at the appropriate time, he would announce his partner.

Prof. Mills was reported to have been in a fix over the choice of his partner due to his inability to announce the candidate at the end of last month, a date that was widely speculated by the media.

But opinion sampling by The Chronicle within the top hierarchy of the NDC on the nomination, showed a strong preference for a northerner.

The paper's earlier investigations revealed a lot of baffling questions as to whether the NDC would swallow the bait of a Christian-Moslem, Southerner/ Northerner partnership, which was successfully adopted by the rival-NPP.

Views from the Zongo communities, where the party enjoys a lot of support, indicated that a northern Moslem running mate would help the NDC regain power.

Die-hard supporters of the party in certain Zongo communities that The Chronicle interacted with prevailed upon the flag bearer to take into account the party's popularity in those communities nation-wide in choosing his running mate.

“It would be suicidal for Prof. Mills to close his eyes to the Zongos who are precisely the majority in the NDC and go ahead and nominate another person. We want Prof. Mills to uphold the leadership drive of Moslem northerners,” one supporter said.

According to them the nomination of a Zongo personality, Alhaji Aliu Mahama by candidate J.A. Kufuor as running mate, helped in no small measure in ensuring victory for the NPP in the 2000 elections.

Some leading members of the NDC in the Zongos dismissed claims that Mr. Martin Amidu, a non- Moslem northerner who partnered Prof. Mills in 2000, polled significant votes.

“The picking of Martin Amidu did not help. We acknowledge his caliber and reputation but we want to put on record that he did not bring the votes for us. That is all that we are saying. We want Prof. Mills to listen to us and carefully study the terrain and come out with a Moslem northerner,” expressed one Zongo leader.

Three names that are currently in the frontline for selection as running mate are, Alhaji Mohammed Mumuni, Member of Parliament for Kumbungu, and Minority spokesman on Legal and Constitutional Affairs, Mr. John Dramani Mahama, MP for Bole-Bamboi and Party Communications Director and ex-National Deputy Treasurer, Alhaji Baba Camara.

The NDC running mate list, however, increased just this week with the name of Alhaji Seidu Iddi, former Northern Regional Minister popping up.

Alhaji Iddi in his early 50s who served previously as deputy Regional Minister for Food and Agriculture in the era of the defunct PNDC and later Volta Regional Minister lectures at the University for Development Studies in Nyamkpala.

In the race is also Alhaji Mahama Iddrisu, co-opted member of the NDC national executive.