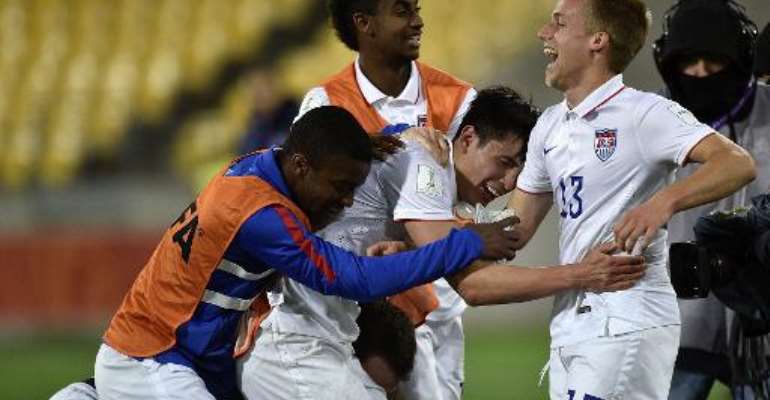 Thomas Thompson (R) of the US celebrates with teammates after victory over Colombia during their FIFA Under-20 World Cup round of 16 football match at Wellington Regional Stadium in Wellington on June 10, 2015. By Marty Melville (AFP)

Wellington (AFP) - The United States and Senegal battled into the quarter-finals of the FIFA Under-20 World Cup in New Zealand on Wednesday, as Mali romped through and Serbia dramatically gate-crashed the last eight.

The US beat Colombia 2-1, despite finishing with 10 men, and Senegal needed penalties after grinding out a 1-1 deadlock with Ukraine as the tournament's knockout phase began.

In another Round of 16 matches, Mali won their all-African clash with Ghana 3-0 and 10-man Serbia snatched a last-gasp 2-1 victory over Hungary thanks to a desperately unlucky own goal.

The US and Colombia set a furious pace in a open first half, with both sides pressing during end-to-end exchanges but unable to take their chances.

Just as Colombia were beginning to dominate, the US scored against the run of play when Paul Arriola's 58th-minute shot was blocked by a defender but fell kindly for Rubio Rubin, who calmly fired his shot home.

Colombia squandered a lifeline with 10 minutes to go when Jarlan Barrera failed to convert a penalty awarded after Kellyn Perry-Acosta was sent off for wrestling Rodin Quinones to the ground in the box.

The victory means the North Americans will meet Serbia in the quarter-finals.

The Serbs were red-hot favourites against Hungary, who scraped into the knockout phase after two defeats in their pool matches.

But the Maygars looked to have done enough with Bence Mervo's 57th-minute strike, only for Ivan Saponjic to head a dramatic stoppage-time equaliser for Serbia.

In another twist, Serbia's Milan Gajic was then red-carded before the match went into extra time.

The Serbs continued to attack, despite the disadvantage, and were rewarded with a winner just seconds before the fixture would have gone to penalties.

Hungarian defender Attila Talaber tried to clear Saponjic's cross for a penalty but instead sent the ball ballooning into his own net to put Serbia into the last eight.

Tournament debutants Senegal were trailing until the 82nd minute, when Sidy Sarr scored the first goal that the Ukrainians had conceded during the tournament.

It was enough to force the match to extra time and eventually penalties, when Ibrahima Sy emerged as the hero.

Sy saved three of his four penalties to book Senegal a quarter-final against either Austria or Uzbekistan.

Ghana, the 2009 champions, qualified top of Group B but looked a shadow of the side that defeated pool rival Argentina in one of the matches of the tournament so far.

Mali showed the greater attacking intent and Diadie Samassekou put them ahead in the 20th minute.

Samassekou combined with Lille's Adama Traore in a quick one-two that split the defence, then sent his a shot past Ghanaian goalkeeper Lawrence Ati.

Dieudonne Gbakle increased the advantage in the 52nd minute, outjumping a defender to intercept the ball on the right wing, before cutting in and netting from the edge of the box.

Aboubacar Doumbia put it beyond doubt seven minutes from time with a cheeky chip over the keeper to make it 3-0.

It was Ghana's earliest exit in seven campaigns, while Mali keep alive their dream of bettering the third-place finish they achieved in 1999.

Mali will face the winner of Thursday's match between Germany and Nigeria in the quarter-finals.