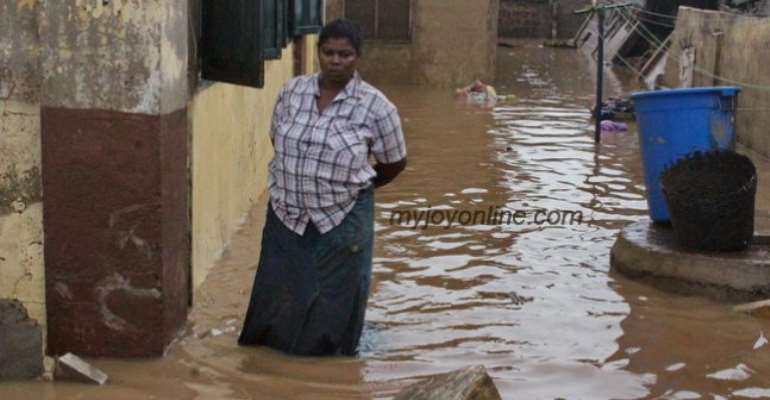 Two people have been confirmed dead in Tema following torrential rains in the Municipality last week.

A young man who played a hero in rescuing a young girl from drowning succeeded in saving the life of the girl but lost his in the process.

An old woman who also attempted crossing a drain was also swept away by the floods, Tema Municipal NADMO Coordinator Hajia Abdulai confirmed in an interview with Joy News Editor Dzifa Bampoh.

Tema was not spared the rainstorm destruction. Even though it was not as serious as the one in Accra. Lots of areas were taken over by the rain water.

According Hajia Abdulai, over 6,593 people have been displaced as a result of the floods.

A resident told Joy News' Joseph Opoku Gakpo he and his family had to go on top of the roof of their house to save their lives.

They had to stay on top of the roof for well over five hours, he narrated.

"The water was right at the level of my chest and I am the tallest in the house," he stated.

The residents blame the flood on a drain in the vicinity and are asking the Tema Development Corporation to take a look at the drains.