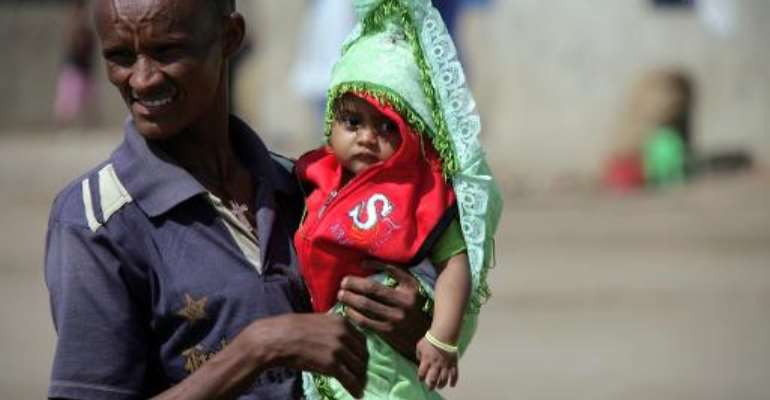 An Eritrean refugee holds his child at Sudan's Shagarab refugee camp in Kassala on January 12, 2012. By Ashraf Shazly (AFP/File)

The UN commission of inquiry on the human rights situation in Eritrea described horrific torture, including electric shock, near drowning, sexual abuse and forcing people to stare at the burning sun for hours.

Its nearly 500-page report details how the country, under Isaias Afwerki's iron-fisted regime for the past 22 years, has created a repressive system in which people are routinely arrested at whim, detained, tortured, killed or go missing.

But Eritrea's foreign ministry -- which denied UN investigators access to the country -- said they were "wild accusations" and called the report "attacks aimed at undermining our sovereignty."

The dictatorship languishes at the bottom of world freedom indices and is one of the largest contributors to the exodus of migrants crossing the Mediterranean Sea to Europe.

It is a crisis Eritrea has in the past blamed on a CIA conspiracy and human rights activists.

"These accusations are simply a continuation and an escalation of the politically motivated campaign to undermine the political, economic and social progress the country is making, including in the area of human rights," the statement added.

"There are those who will hide behind these outrageous claims to whitewash their transgressions against Eritrea and to seek pretexts for their acts of destabilisation," it added, calling the report "vile slanders."

Tens of thousands of young Eritreans brave razor wire, minefields and armed border guards to sneak out of the country every year in order to escape repression and avoid years of conscripted military service.

The UN commission report was based on 550 interviews with Eritreans living abroad, and on 160 written submissions.

It said the government is responsible for "systematic, widespread and gross human rights violations" on an almost unprecedented scale, driving some 5,000 Eritreans to flee every month.

The report found that some of the numerous abuses committed in Eritrea "may constitute crimes against humanity", with violations taking place on a "scope and scale seldom witnessed elsewhere".

Eritrea, which broke away from Ethiopia in 1991 after a brutal 30-year independence struggle, is "ruled not by law but by fear," the report read.