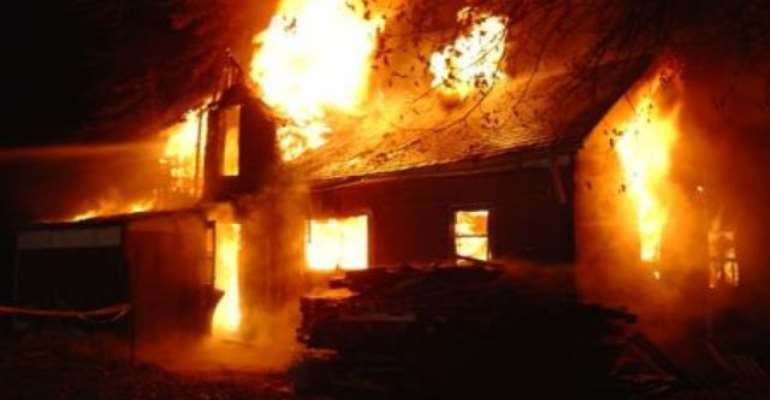 Wamfie (B/A), June 8, GNA - The Palace of Barima Ansu Agyei, Chief of Wamfie in the Brong-Ahafo Region, was on Monday razed down by fire that caused the destruction of properties costing millions of Cedis.

Items destroyed in the six-bedroom building included umbrellas,chairs and palanquins, as well as other personal belongings.

Madam Cecilia Oppong, 58, an occupant who was present at the time of the incident, collapsed and was rushed to the Wamfie Polyclinic for medical attention.

Briefing the Ghana News Agency (GNA) on the incident at Dormaa-Ahenkro, Divisional Officer (DO) Mr. Richard Hormeku, the Dormaa Central Municipal Fire Commander, said he received a report about the fire outbreak from Dormaa FM, a local radio station around 1100 hours, so he immediately dispatched a team of fire personnel to the area.

Mr. Hormeku said on arrival, the team detected that the Palace, had been engulfed by fire, continuing that the crew hurriedly began operation to extinguish it.

He, however, added that in the process some of the youth in the town attempted to attack them, but they were restrained due to the timely intervention of the Police, which enabled the crew to proceed with fighting the fire.

DO Hormeku explained that the youth had wanted to attack the fire crew because they felt they had delayed in coming to the scene.

Touching on the cause of the fire, he said investigations conducted revealed that a fridge which was situated in one of the rooms, where a lot of items were burnt, had poor ventilation that caused the motor of the fridge to generate and accumulate heat which exploded and ignited the fire.

DO Hormeku expressed grave concern about the numerous speed rumps which have been created on the Dormaa-Ahenkro-Sunyani road, as well as his outfit's oversight responsibilities for the Dormaa West and Dormaa East Districts, as factors which obstructed their quick arrival to scenes of fire outbreaks.

'The speed rump slows the movement of the vehicle. The two districts are supposed to have their separate Fire Stations but they don't and my outfit had to run all three Fire Stations simultaneously', he complained.