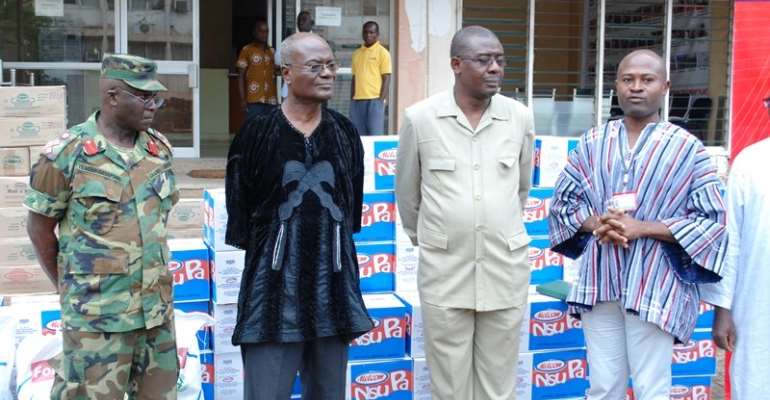 Accra, June 8, GNA - The Melcom Care Foundation, the Charity Wing of Melcom Group of Companies, over the weekend supported victims of the Goil Fuel Station disaster with assorted relief items.

The items, which consisted of 300 cartons of Melcom Nsu Pa, 300 cartons of biscuits and 25 bags of five-kilogram rice, were to be distributed to the victims on admission at the Korle Bu Teaching Hospital and the 37th Military Hospital.

Mr Godwin Avenorgbo, the Director of Communications of the Melcom Group of Companies, presented the items in Accra to Nii Djanmah Vanderpuye, the Deputy Greater-Accra Regional Minister.

The Communications Director said the nation was going through painful moments due to the loss of lives in the fire disaster and the floods.

He observed that the Group lost one of their staff during the flood.

Mr Avenorgbo said the donation was to demonstrate the Group's support and love for the victims of the Goil Fuel Station disaster.

Mr Vanderpuye expressed his gratitude to the Group for the love and support for the victims, and added that the nation was facing a trying moment which would soon be over.

Colonel Akwasi Michael Yeboah-Agyapong, the Commanding Officer, 37th Military Hospital, said the hospital was grateful to Melcom Group for their support over the years.

He appealed to corporate entities to emulate the Group's shining example in support of the hospital; stating that the hospital needed blood and antibiotics.

Joblessness, indebtedness to the tune of 80% of our GDP frig...
54 minutes ago