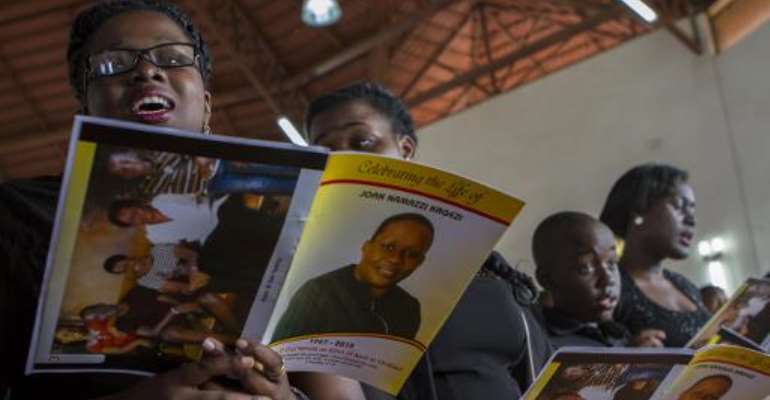 Children of the late acting assistant director of public prosecution Joan Kagezi attend a church service for their mother on April 2, 2015 in Kampala. By Isaac Kasamani (AFP)

Kampala (AFP) - The trial of 13 men accused of taking part in the 2010 Shebab bombings, which killed 76 people in Uganda's capital Kampala, resumed on Monday without the lead prosecutor, who was murdered in March.

Joan Kagezi, Uganda's acting assistant director of public prosecution, was killed by men on a motorbike in front of three of her children. Police are still hunting for the killers and have made several arrests.

The trial of the accused -- seven Kenyans, five Ugandans and one Tanzanian -- had begun earlier in March at Uganda's High Court, but was postponed after the murder. They are facing a range of charges including terrorism, murder and membership of a terrorist organisation.

The July 2010 suicide bombings claimed by Somalia's Al-Qaeda-affiliated Shebab targeted football fans watching the World Cup final between the Netherlands and Spain at a restaurant and a rugby club in Kampala, and were the region's worst attacks in more than a decade.

The suspects filled nearly two rows of seats on Monday in the packed courtroom, where there was standing space only and tight security. Media reports said bodyguards have now been assigned to all lawyers working on the case.

Justice Mike Chibita, Director of Public Prosecution (DPP), told Justice Alphonse Owiny-Dollo that the prosecution had "deemed it important" to come to court to introduce his new team, making mention of "our fallen colleague".

He said they owed it to "this court and the nation at large" to assure them that "justice is done". Defence lawyer Caleb Alaka said his team had the "same sentiment about the loss of our colleague".

"It (Kagezi's murder) was a terrible thing, not only for the DPP, but also for us in defence, because we were working closely together," he said. "We call upon the powers that be to make sure that the perpetrators are brought to justice."

You're A Covenant Keeping Leader — Ahafo Chiefs To Akufo-Add...
40 minutes ago