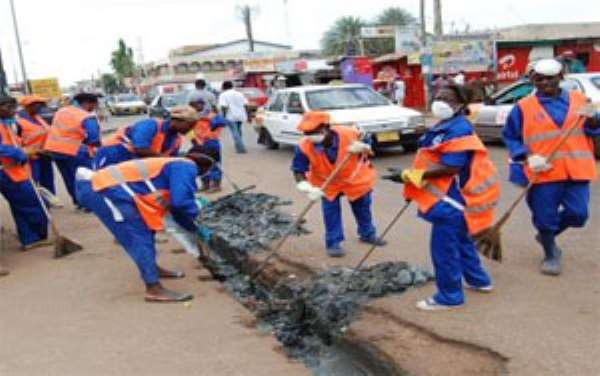 The seventh edition of the National Sanitation Day (NSD) exercise recorded high attendance in the Sekondi-Takoradi Metropolis in the Western Region, which hosted the Local Government and Rural Development Minister, Alhaji Collins Dauda, and his entourage.

The minister, who was impressed about the manner in which the people had embraced the exercise, dipped his hand into his pocket and dished out money to some people who were seriously working.

At the Takoradi Market Circle, Alhaji Collins Dauda joined some residents to desilt the main gutter in front of Bank of Africa.

After that the Local Government Minister and his team visited the Port Quarters area in Takoradi where he openly gave an undisclosed amount of money to a 15-year-old boy who was desilting a gutter.

According to the residents, the boy, Isaac Mensah, a student of Presbyterian JHS, had for the last seven months been initiating clean-up exercises in the area.

In a brief interview with journalists, the boy noted that he was inspired by commercials on radio and television on the need for people to clean their communities.

Another point where the minister had to dole out money was at the Majestic Hotel area in Sekondi where a funeral was being held. On reaching there, Alhaji Dauda gave an amount of GH¢200.00 to the MCE to be given to the bereaved family.

By 7'clock Saturday morning, most residents were already out in their numbers clearing chocked gutters, weeding, sweeping and collecting heaps of refuse in the various communities.

The enthusiasm exhibited by the residents, chiefs, opinion leaders, the security services and workers of Zoomlion Ghana Limited among others, soon saw most of the principal streets being rid of filth.

All stores and shops in the central business district of the metropolis were closed until at about12 noon when the exercise was over.

Other areas visited included Kwesimintsim, Essikado, Essipon and Kojokrom and in all those areas, good number of residents turned out to clean their communities.

Entertainment
The presence of some actors and musicians at the exercise in Takoradi also drew people to the event.

Actors and musicians like Clement Boney, known in show biz circles as Mr Beautiful and Gyedu Blay Ambulley – both of who hail from Sekondi – Bob Okala, Reggie Rockstone and Sagaribiwe, were all there to partake in the exercise, adding a bit of entertainment to it.

Commendation
Later in an interview, the Local Government Minister commended the chiefs, the people as well as the media for their efforts in making the cleaning exercise successful.

He noted that the commitment and passion which the people of the metropolis showed were an indication that the country could get filth out of the major cities and towns.

He was however, not enthused about the attitude of some few people who did not take part but observed the exercise from their houses.

The Regional Minister, Paul Aidoo, expressed profound excitement at the turn-out and said it indicated that gradually the idea was being embraced and appreciated by Ghanaians.

He was however, not happy that the oil and gas companies operating in the region did not support nor participate in the exercise.