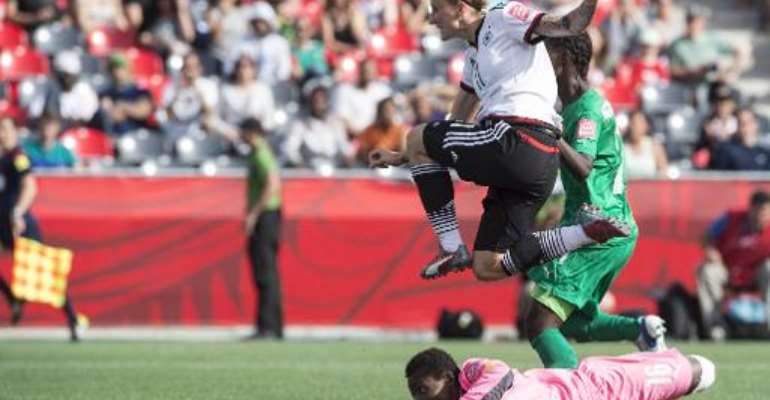 Germany's Anja Mittag jumps over Ivory Coast goalkeeper Dominique Thiamale as they watch the ball enter the goal during a Group B match at the 2015 FIFA Women's World Cup at Landsdowne Stadium in Ottawa on June 7, 2015. By Nicholas Kamm (AFP)

Ottawa (AFP) - Former champions Germany and Norway got off to winning starts at the women's World Cup on Sunday as newcomers Ivory Coast and Thailand took a battering.

Germany whipped the Ivory Coast 10-0 after Norway thrashed Thailand 4-0 in the opening round of Group B matches in Ottawa's Lansdowne Stadium.

The 2003 and 2007 winners took five goals in either half against the Ivorians, who at 67 in the world are the lowest ranked team in the tournament.

Germany coach Silvia Neid admitted even she was surprised by ease with which her side won against a team who qualified by finishing third at the 2014 African Championship.

"We had judged them to be better than they were today," said Neid.

"We outran them and are glad that we took home the three points. Ivory Coast came up quite a bit, it was a different style, and it was very easy to get behind their lines - we know that Norway will be much tougher on Thursday."

Ivory Coast coach Clementine Toure admitted it was a tough learning experience for her girls.

"From this game, we have positive points we can take out - the experience.

"It's our first participation in the World Cup, and our girls discovered something today - a high level of competition, and it did have an effect on us a little bit.

"We must forget the score from today, forget the negative points, and learn from this. Playing the best team in the world is also the best way to learn for us."

The best goal of the game was Mittag's second, when she picked up a Tabea Kemme cross hammering the ball into the back of the net.

But for some saves by Ivory Coast goalkeeper Dominique Thiamale the damage could have been more severe for 'Les Elephantes'.

Germany maintain their unbeaten opening match World Cup record as no African team have ever won their first game.

"The first game of the tournament is always nerve-wracking," said Norway coach Even Pellerud.

"We are happy to have three points, but we have to improve aspects of our play against other teams."

Thai coach Nuengruethai Sathongwien said: "Getting the first goal would have given us a morale boost more than anything, because we were playing a superior team."

Germany and Norway will now fight for first place in their group next Thursday, in Ottawa, in a repeat of the last European championship finals in 2013 which the Germans won.

Thailand and the Ivory Coast tackle each other as they search for their first World Cup points.