Samia Yaba Nkrumah Calls For An Improvement In Sanitation Infrastructure 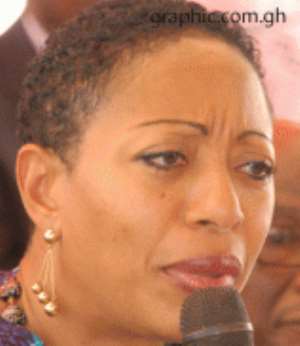 The Chairman of the Convention People's Party Samia Yaba Nkrumah has called for the development of sanitation infrastructure in the country as part of measures to improve the quality of life of the people. She said good sanitation was paramount for the prevention of diseases such as cholera and dysentery.

Madam Samia was speaking to the media at the Convention People’s Party (CPP) Headquarters after a tour of devastated areas in Accra following the flooding and fire outbreak in the city and the launching of a CPP initiative to raise funds and household goods and clothing for the victims of the fire and floods in Accra.

The CPP Chairman who took the opportunity to speak on national economic development issues and the development policy recommendations of the Convention People's Party suggested the development of our brick and tile industry for the tiling of all markets, lorry and car parks and pavements to ensure the healthy environment of public places and minimize the volume of silt and sand that fills the open sewers.

She also mentioned that the development of our brick and tile industry will facilitate the delivery of low cost decent housing for the people because the industry delivers most needs in housing including roofs, walls and floors. The Chairman of the CPP saw no justification in the closure of the divested Saltpond Ceramics Company and its raw material source of aluminium silicate and silica mining that was an investment of the CPP government.

The Chairman of the CPP recommended that cement products can mainly be used in the construction of durable roads and bridges and towards this end, the Nawuli Limestone Project should be fully executed to reduce or eliminate the importation of clinker because the development of our natural resources in manufacturing is a factor in the reduction of our balance of payment deficit on current account that causes the depreciation of our currency, debt accumulation and dependency.

Madam Samia Yaba Nkrumah called for the rejection of the Economic Partnership Agreement (EPA) with the European Union until the country has developed a manufacturing capacity to benefit from the opportunities of the (EPA). She explained that every country in economic development history had at a stage in her development protected her markets and manufacturing sector for the development of her manufacturing capacity for international competition. The enticement of the trade opportunities of the EPA were therefore in her view shallow and “pie in the sky”

The Chairman of the CPP in conclusion pointed out that the nation should in all these ensure that as far as possible, investments in the development of our natural resources are financed by domestic capital. She explained that the difference between the investment outcomes of a utilization of domestic finance and external finance in project development is the difference between our town of Obuasi and the South African city of Johannesburg which are both gold producing areas.