The Flood, I Blame Ghanaian Journalists Too

By Jamaludeen A. Abdullah
Feature Article 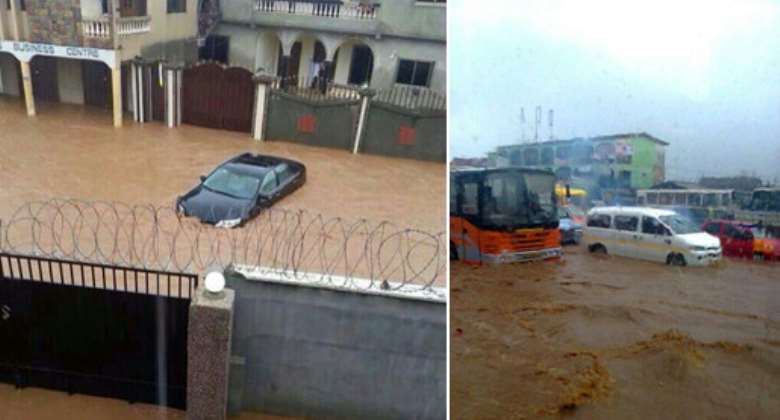 We woke up on Thursday June 4th to the horrible devastating disastrous disaster, which has claimed over two hundred lives. Lives that were working hard to survive in the unconscionable corruption been perpetrated by John mahama and his cronies, who are been protected by Ghanaian journalists. I blame our journalists especially those in Ghana and particularly in the capital Accra.

Most of the biggest names in the Ghanaian media work in radio stations stationed at the heart of the capital, this means they walk through Kwame Nkrumah Circle almost every day and other areas where gutters are choked and are catalysts for creating floods in Accra, which can kill and has been killing everyday. But what did they do? All they are interested in is hosting useless nonperforming ministers in their studios, giving them titles that are nothing but an insult to human intellect.

The giants in the Ghanaian radio media Multimedia and Peace Fm with their multitude of famous radios are right at the heart of Accra and they boast of the biggest names in the game, who if not blinded by the bribes they collect from the government and their friends in the ruling government, could have drew the attention of the mayor and his bosses to the cause of the Thursday's floods by keeping them on their toes to do what they are paid to do. Instead they flooded the airwaves with matters and happenings in the opposition party, who have not the direct power to deal with situations confronting the citizenry.

Even after this devastation, sights that are only seen in war torn countries, our journalists have not shown a piddling of concern, by changing their attitude towards those who sat aloof and waited for this to happen. The late president Atta Mills was handed a whooping $795 million to solve the drainage problems, whilst nothing was done, no journalist cared to talk about it yet they were all aware of such amount having been given to us. Are we that stupid as a nation or just brainless. It's unfortunate no minister or journalist was caught up in the accident, it would have left an indelible mark and give them a reason to change their attitudes.

We have been and are hearing of mayors and ministers who have resigned due to such occurrences under their supervision, but the main reasons they resigned are the pressure from the journalists in their country or their own conscious conscience. Are we expecting Alfred Okoh Vanderpuye to do the honourable thing by resigning or been sacked by an equally hopeless boss John Mahama? No, but the power of the masses far outweighs the power of the president.

I expect the whole of Ghanaian journalists to turn on the president to perform by sacking the useless and corrupt mayors and ministers in Ghana. If this is not done then the journalists must hold their heads in shame, by taking part of the blame of all that's not well in Ghana. Governance is a collective action which journalists are part of. Let's wake up as a nation to hold those in power accountable.

If I am wrong by blaming our journalists for Thursday's then tell me.

FORWARDED BY JAMALUDEEN A. Abdullah

SSNIT Scandal: Court to decide on mode of trial on December ...
32 minutes ago

A/R: Man caught having sex with sheep on the run
57 minutes ago