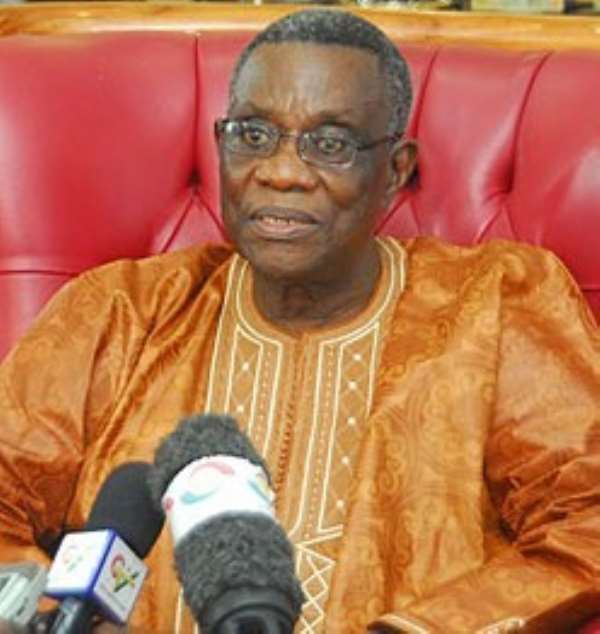 Finally, the Fante-Ekumfi family of the late President John Evans Atta-Mills is coming around to recognize the great blunder they committed in allowing then-Vice-President John Dramani Mahama into conning them to have their distinguished deceased relative buried near the old Osu slave castle "like a slave." Now the latter quote is not from me; it was reportedly issued by the family of the former University of Ghana Law School professor. We shall have occasion to pick up this aspect of the Atta-Mills Story as time and tide permit.

For now, let us focus on the remark widely attributed to National Democratic Congress founding father Chairman Jerry John Rawlings, to the curious effect that the death of then-President John Evans Atta-Mills was a good omen for the chances of the NDC clinching victory in the 2012 Presidential Election, and that had President Mills not "mysteriously" expired, the NDC may well have headed straight into the rocky land of opposition politics (See "Death of Mills Good Omen For NDC - Rawlings Suggests" MyJoyOnline.com / Modernghana.com 5/11/15).

We all know that at the time of his death President Mills was terminally indisposed, although key NDC operatives had adamantly maintained that the conspicuously ailing retired tax-law professor was in tip-top shape and form. Nevertheless, bizarre events surrounding the last couple of hours, or so, leading up to both the death and the public handling of the same by the Mahama government, has continued to raise disturbing questions. The government has to-date not offered any meaningful explanation for the precise circumstances under which President Mills expired. What we have learned, by way of explanations at various times, have been relatives publicly giving contradictory accounts of how the most powerful Ghanaian public figure expired.

For example, some accounts have the van/ambulance carrying the dying President Mills being driven incognito to the maternity ward of the 37th Military Hospital. Other accounts also have the President having already given up the ghost by the time the reportedly unmarked vehicle ferried what was alleged to be a still-living President Mills from the Castle. Whatever the real nature of the situation must have been is of far less concern to the author of the present column. What most concern us here are the indisputably curious pronouncements by President Rawlings, the man who made President Mills the prominent figure that the latter became in the country.

Mr. Rawlings, according to media reports, claims that the death of Prof. Mills was "absolutely necessary" and, indeed, a good omen because had his former arch-lieutenant not died at precisely the time that he did, the government of the National Democratic Congress would almost certainly have been driven into opposition. Now, there is a problem with the preceding pronouncements. For instance, does it mean that so desperate were the movers and shakers of the National Democratic Congress to hang on to power that even if it took the deliberate liquidation or assassination of President Mills, such capital offense would have been worthwhile? We are asking this question specifically and especially because the first public, or official, statement made by then-Vice-President John Dramani Mahama was that "God in His Great Wisdom" had deliberately and opportunely removed his immediate boss from the scene.

Mr. Mahama would also, of course, go on to celebrate his "serendipitous" achievement of being the first post-independence-born Ghanaian to be sworn into office as Interim-President of Ghana. But why did God have to wait until barely four months to Election 2012 before deciding to "fortuitously" shove my dear good, old Uncle Tarkwa-Atta off the scene? The latter question is relevant because the "fatal removal" of President Mills occurred precisely about the same time that his most powerful minions and closest aides were telling the Ghanaian public, and electorate, that the evidently dying man, in retrospect, of course, had never been healthier than the moment that he clearly appeared to be in the throes of death.

There has been talk over whether it was not about time the government opened up an independent enquiry into the death of Ghana's first president to die in office. I find such talk to be absolutely necessary, if only because it promises to put a definitive closure to any lingering doubts in the minds of both the Mills Clan and the Ghanaian taxpayer and electorate who invested their fortunes and destiny in the man. If, indeed, God had any hand in the "mysterious" death of President Mills because Divine Providence actually saw far better leadership in then-Vice-President Mahama, a man the Rawlingses publicly claimed was irredeemably untrustworthy, and one who has exhibited what some of his most ardent critics claim to be his unprecedently gross incompetence, then, of course, God may direly be in need of good judgment Himself.

Of course, we know the tragic passing of President Mills garnered a lot of sympathy for the National Democratic Congress, in particular the famous: "I am one of your Fante sons" before a deliberately orchestrated durbar of Fanteman chiefs in Cape Coast. But truth be said: The real difference at the polls inhered in the willingness of Electoral Commissioner Kwadwo Afari-Gyan to rig the ballot in favor of his "nephew-in-law," Mr. John "Lordina" Mahama.

Don't worry yourselves contributing Ghc100 to support Nation...
11 minutes ago