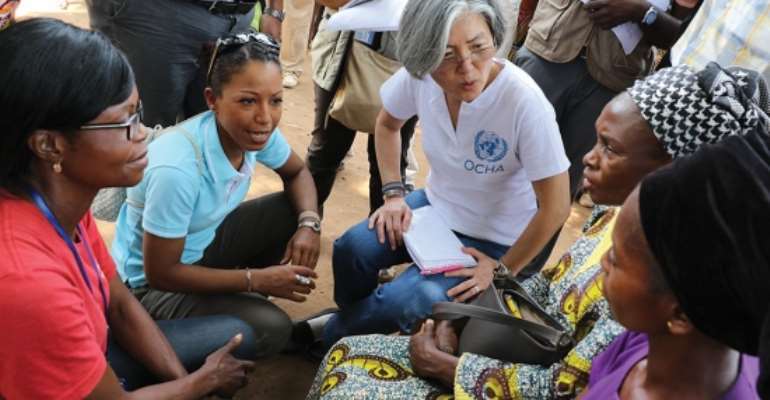 The current security and humanitarian situation in the Central African Republic (CAR) is dire—a reality that has prompted women of the CAR to make one urgent request to the international community: to be included in the conflict-stricken country's ongoing peace-building process.

Even though the CAR has never known real peace since independence in the 1960s, recent events have raised the level of turmoil, starting in March 2013 when rebels seized power, setting off near genocidal acts of violence between Muslim and Christian communities. A quarter of the population, or about one million people, was displaced.

In January 2014, when the international community intervened to bring normalcy to the country, a woman, Catherine Samba-Panza, was chosen as the interim president to lead the country out of chaos.

Since then, notable progress on security and political fronts has been made, although the humanitarian situation remains unstable, with more than 2.7 million people out of a population of 4.6 million needing humanitarian assistance. Half a million of them are still displaced within the country as internally displaced persons (IDPs), and a further half million have sought shelter as refugees in neighbouring countries.

Despite a woman in the presidency, grassroots women of the CAR were largely left out of the peace and reconciliation talks. When UN Deputy Emergency Relief Coordinator Kyung-wha Kang visited the country early this year, the women expressed their frustrations, not just over the continuing lack of security but also their exclusion from the peace-building and reconstruction processes.

“The women in the CAR want to rebuild lives that are sustainable and safe. They want to overcome the sense of fear and victimisation they are going through,” said Ms. Kang, in an interview with Africa Renewal. “With some support and empowerment, these women could hold the key to unlocking and liberating themselves from fear and victimisation.”

In times of violence and lawlessness, and even after the violence, women and children are the first to suffer. According to Ms. Kang, in a country like the CAR where women are deeply excluded, the crisis exacerbates the discriminatory social structures that had existed prior to the conflict.

Ms. Kang and her team, including the Special Rapporteur on the Human Rights of Internally Displaced Persons, Chaloka Beyani, and the Director of Operations at the European Commission's Humanitarian Aid and Civil Protection department, Mr. Jean-Louis de Brouwe, visited different parts of the country, including the camps for IDPs, and were alarmed that the lines between armed elements and civilians have become blurred in many displacement sites. The camps are unprotected and armed elements mingle with the IDPs freely. Incidents of sexual and gender-based violence against women and girls, particularly very young girls, are common and much of it attributed to the armed elements.

She noted that it was not enough to just stop the war. The peace process has to go beyond reconciliation and address some of those root causes of the conflicts in the country, which can be a long process.

Amidst these challenges, the lack of resources continues to hamper efforts to provide relief for the IDPs.