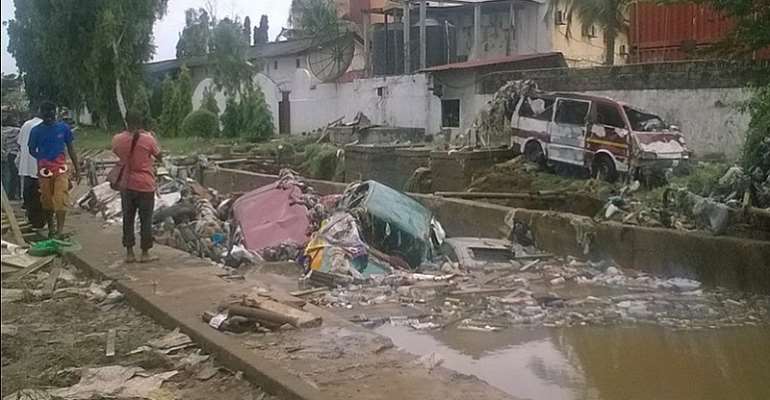 Flooding in Ghana is not new, since 1968, Governments over the years have promised their commitment to solving the problem but the citizens are always affected every year when the rains set in. The perennial problem of flood persists because governments over the years lack the strong political will to solve the problem hence the horrific scenes that greet us during periods of torrential rains in the country.

The causes of flooding in Ghana is mainly as a result of either natural or man made factors, the attitude of people dumping plastic waste and other materials into drains, prevent the smooth flow of water during the raining season. Structures have been developed on water ways which diverts the natural course of the water hence the water finding its own way.

Some drains have also been poorly designed by city planners hence can not contain the large volume of water when it rains. This is also coupled by the fact that most developers now cement the floor of their compounds when they put up structures which prevent the rain water to sink into the soil so easily.

The lost of human lives, properties and the donation of 50 million Ghana cedi to the affected victims could have been avoided if the government had stacked to their promise of solving the problems long ago.

The Ashaiman Middle East Development Association is therefore calling on all city planners to go to the drawing board and come out with adequate plans that can make our cities resilient in other to reduce the negative impact of the floods. We are also calling on people within the flooded areas to also adopt good hygienic behavior in other to prevent the outbreak of cholera.

By this press release, we the members of the Ashaiman Middle East Development Association will hold the government accountable to it’s own promise of finding a lasting solution to the perennial flooding in the country.