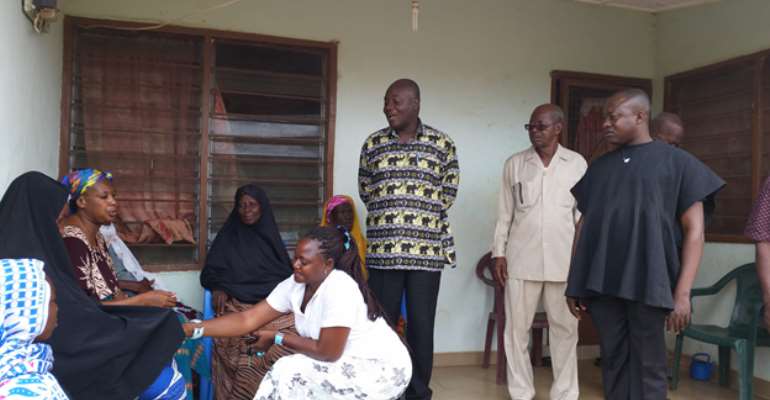 The Member of Parliament for Okere in the Eastern region who doubles as the Minority Chief Whip, Dan Kwaku Botwe has paid a three day visit to Bolga in the Upper East region to mourn with the family the death of the late regional chairman, Mr. Adams. The two times former General Secretary of the party extended his condolences to the widow (Mrs. Adams), the children, the rank and file of the regional party and the NPP as whole.

Hon Dan Botwe mentioned that the shocking news of Chairman Adams’ death got to him while attending ECOWAS parliament deliberations in Abuja, Nigeria last week. He profusely bemoaned the accentuating political violence and its devastating mortality rate in our body politic and decried the deplorably helpless internal and intra-political distraught in our Ghanaian society.

He therefore used the occasion to appeal to the party members to exercise restraint and to allow for the legal processes to take its cause in bringing the perpetrators to book. He also entreated that the party structures are allowed to run without let or hindrances while a lasting solution is found to the problems confronting the party.

Apparently, Hon Dan Botwe averred to the fact that the late regional chairman was a trusted personal friend, colleague and close confidant with whom he had several working relationship as compatriots since 2000.

Alhaji Adam he reckons was a true party man, a rare patriot with tremendous support for not only the regional party but the generality of the New Patriotic Party. He again noted that the late chairman was a resourceful individual who has enormous respect for everyone and who has put himself at the disposal of the party in helping win power in 2016.

The Minority Chief Whip also met with some party regional elders including Col Milla, the regional secretary, Alhaji Nuhu, Dr. Rockson Bukari, former Metropolitan Chief Executive (MCE) all of whom he entreated to use the death of the beloved regional chairman to foster unity, brotherliness and a common sense of purpose towards attaining our collective goal of winning the 2016 general elections.

The most befitting tribute to be given to our brother -Chairman is to win the 2016 general elections. It wiould be the greatest honour done him. Hon Dan Botwe posited.He has since returned to Accra for other party commitments.

He was giving a massive reception by the family,officers and members of the regional party throughout all the seven sections of the meetings held. Accompanied him were the immediate past Regional Secretary of the Northern region, Dr. Clifford Braimah and the Personal Assistant and immediate past National Youth Organizer-Emmanuel Attafuah- Danso.