The informal sector is not illegitimate - Amissah-Arthur 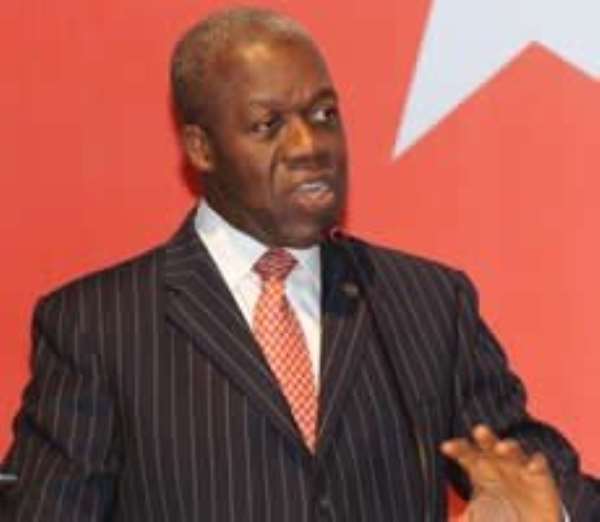 Informal economies in Africa exist, but should not automatically be regarded as illegitimate and marginalised, said Vice President Kwesi Amissah-Arthur at the World Economic Forum on Africa in Cape Town on June 4, 2015.

Speaking in a televised BBC debate entitled “Informal Is the New Normal”, Amissah-Arthur said that informal producers and traders are, in fact, the mainstream of many economies throughout the continent, and governments must respond with policies that recognise this fact.

“For example, in Ghana, farmers in rural areas are, in effect, an informal economy, yet they are large contributors to the country’s foreign earnings,” said the Amissah-Arthur.

“What is required is a policy crossover. We cannot assume such activities are illegitimate when making policy. We need to make legitimate activities in the informal sector quantifiable so that we can respond adequately,” he said.

With the ultimate aim to bring the informal sector into the formal sector and into the tax base, said Amissah-Arthur, the Ghanaian government has set up a pension system for rural farmers, allows bank accounts to be opened without onerous requirements such as utility bills and employment letters, has created youth training initiatives, and has taken steps to allow credit access for small companies.

“They are small steps, but they are progress towards bringing the informal sector closer to the formal,” he added.

Mandla Sibeko, Chairman, Mineonline Africa, South Africa, said that the informal sector is increasingly a youth demographic due to the very limited employment opportunities being created in the formal sector. “The future of Africa is self-employment and creativity,” said Sibeko, adding that Africa needs to create 80 million jobs each year to keep up with the numbers of young people reaching working age. “The young are forced to be in the informal sector, so their future has to be self-creation,” he added.

Huge opportunities do exist for such self-actualization, said Sibeko. “More than 80% of what we consume in South Africa, for example, comes from outside the continent. So there are obvious opportunities there for people to make many products,” he said.

Sibeko called for young people and small enterprises to be given more space to be creative, pointing out that four large banks dominate in South Africa, as does one pay-television company, thereby severely reducing job-creating opportunities for any small businesses that might evolve from the informal sector.

John B. Veihmeyer, Global Chairman of KPMG International, USA, said there is a tremendous amount of interaction between the formal and informal sectors in Africa – making it difficult to distinguish between the two. Indeed, many young people have a formal-sector job by day and a second, informal, job at night. “Policy initiatives to grow economies cannot differentiate between these two elements; it’s not either-or. Growth should be about lifting all boats in the sea,” said Veihmeyer.

He said that many youth feel shut out of their own countries’ economies and rigid government policies on minimum wage and labour rights mean they do not have opportunities in the formal jobs market.

Winnie Byanyima, Executive Director, Oxfam International, United Kingdom, called for poor communities outside the formal economy to be given more access to the supply chain. She asked that governments ensure that, with such access, fair prices are paid, there is protection against low wages, there is risk insurance against changing weather and a system of credit access is introduced.

More than 1,250 participants are taking part in the 25th World Economic Forum on Africa in Cape Town, South Africa, from 3 to 5 June 2015. The theme of the meeting is “Then and Now: Reimagining Africa’s Future”.