Beyond Albino Killings, Witchcraft And Elections In Tanzania 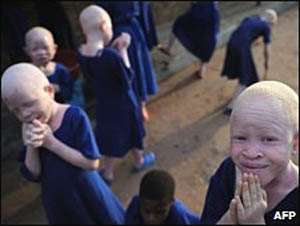 If you are one of those who think there is no connection between politics and the savage practice of albino killing in Tanzania, then you need to read the recent statement from the Deputy Minister for Home Affairs,Pereira Silima. Silima made it clear to politicians in the country that if they stopped patronizing the ‘witch doctors’ then this East African country might see an end to the shameful and horrific murders of albinos.

The people in Tanzania need to discard the belief that drives them to attack kidnap and kill people living with albinism. Albinos need love and care. They should not be hunted down and butchered like animals. That sounds pretty easy to do. Right? Yes I am aware it is not that easy to eradicate such entrenched notions. Traditional belief and practice die hard. But the fact is they die anyway.

The Deputy Minister said: "I want to assure my fellow politicians that there won't be any parliamentary seat that will be won as a result of using albino body parts," I mean, mere assurance is not enough to stop politicians from indulging in ritual killing and sacrifice that will enhance their success or victory during elections. I think there is more to do to stop albino killing than making political pronouncements.

The main problem is that this belief that people can use spiritual or magical means to enhance their luck, excel in business and in fishing, win an election or a football match is very strong in Tanzania and in other parts of the region. Though many African politicians openly and publicly denounce ritual killings, they still hold tenaciously to this fantasy.

They believe in the potency and efficacy of ritual sacrifice. So the question is: how can we make progress in this area if people still believe that ritual sacrifice can change their fortune for the better? So, public denunciation is not enough. Public warning of politicians alone cannot do the job. There is need for a critical thinking-based education and enlightenment for the Tanzanian public.

We, Africans, need to abandon these irrational and superstitious beliefs because, first they are inhuman and again they have no basis in reason, science or ‘reality’. I know for most Tanzanians this will be a bit ‘hard’ to swallow but we need to start learning to embrace this hard fact. According to a popular saying the truth that hurts is the truth that liberates. Tanzanians please embrace this bitter truth for the sake of our own intellectual and moral liberation and yes for the sake of people living with albinism. It is never too late to seek enlightenment and embrace a reasoned approach to life.

I guess if one asks the Deputy Minister if he believes that apart from killing people living with albinism that a person can use some spiritual or mystical means to enhance one’s success or victory, he would likely to reply in the affirmative. If he would not, I am almost certain that other parliamentarian would. They would try to legitimize this by making reference to Islam or Christianity or both.

As if these faith are less superstitious than the beliefs that informed albino killing. I mean they are not and that is where they problem lies today. Many Africans find it difficult to abandon superstitious beliefs and practices because they are reinforced by Christianity and Islam. They think or have been made to think that African traditional beliefs are ‘fetish’ but Christian and Islamic beliefs are not. I am sorry they are.

In fact, these two religions have added more to the pool of superstition in the region. Christianity and Islam have complicated the intellectual and moral fight by Africans against harmful beliefs and practices like albino killings. Africans needs to wake up to this brutal fact and shake off the yoke of irrational beliefs whether they are traditional, Christian or Islamic and embrace the values of enlightenment.

Politicians may not indulge in the ritual killing of persons with albinism but they would perform other forms of ritual sacrifice. Otherwise they would commission imams or marabous, priests or diviners to provide them some spiritual coverage. I mean this halfhearted approach to tackling superstition based atrocities in the region would not take us anywhere. I am not equating human sacrifice with animal sacrifice. I am only pointing out that the whole gamut of ritual sacrifice is empty and baseless and must stop now