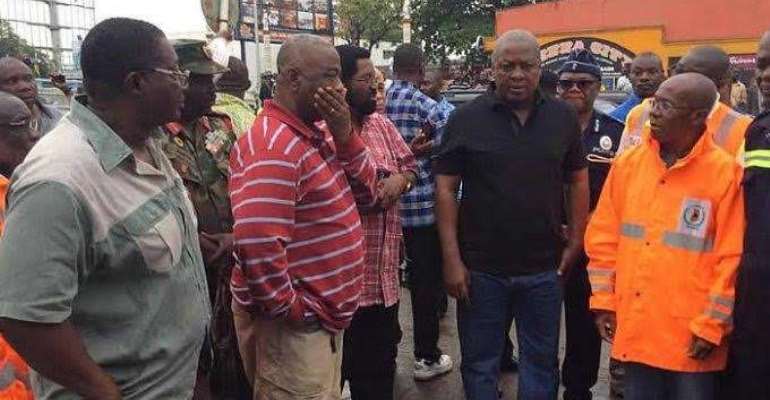 Accra, June 4, GNA - President John Dramani Mahama on Thursday said the Government has no option than to employ 'drastic' measures to staunch the perennial flooding of the country's capital city.

'We will have to take some measures to be able to avoid from this happening in the future,' President Mahama announced.

'Often when these measures are drastic, you have a lot of sympathy and pressure not to take those measures but I think that the time has come for us to remove houses out of water ways and the public should understand that it is necessary to save everybody else.'

In explaining that Accra is a flood-prone city as a result of its location, President Mahama pointed out that human activities also contributed to the disaster.

'Littering in the drains and all those negative practices make it difficult for the water that is coming from the mountains to reach the sea,' he said.

'This loss of lives is catastrophic, almost unprecedented,' he said.

He said with other government officials, he had not slept throughout the night, 'monitoring what was happening.'

The heavy floods have swept through, Accra, causing devastating damages to lives and property, whilst majors roads are now unmemorable.

The floods destroyed homes, cut off electricity and forced the closure of schools and shops.

Officials are yet to give the number of casualties as a result of the torrential rain.

Rescuers are also busy pulling many scorched bodies from a Ghana Oil Company filling station next to the Ghana Commercial Bank at Kwame Nkrumah Circle, which totally burned down in spite of the rains.

The fire spread to about five residential buildings and set several cars parked in that area ablaze.

[Hot Video] Shatta Wale vim dies as prisoners hoot at him in...
54 minutes ago