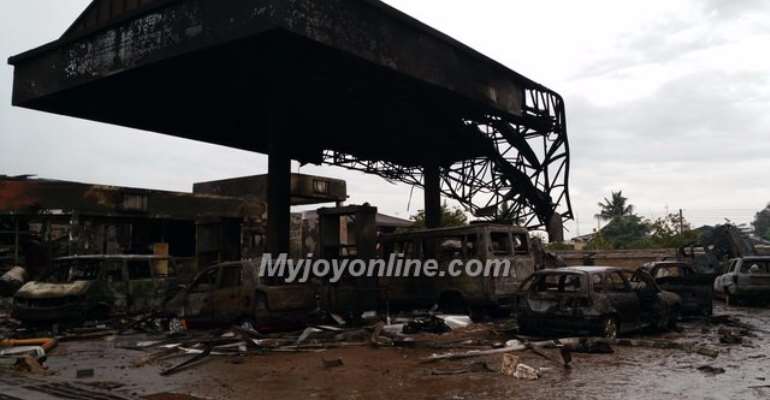 The incident which started around 10pm Thursday stretched personnel of the Ghana National Fire Service to their limit in their attempt to bring the fire under control.

The flood that accompanied the torrential rains also impeded the work of the rescue team.

When Joy News got to the scene, the fire which started from the Goil filling had spread to four buildings which house businesses, reducing everything to ashes.

When it became apparent that fighting the fire was going to be a herculean task, the fire service personnel focused their attention on rescuing individuals who were trapped in nearby buildings.

They succeeded in bringing out more than 10 people alive but the absence of an ambulance meant they had to struggle to stay alive after their rescue.

At 2am, the fire officers with help from the Police and a few volunteers managed to bring the fire under control but also started the darkest part of the exercise.

Access to the razed filling station revealed burnt bodies of tens of people and their positions clearly showed their unsuccessful struggle to survive.

Few minutes passed 4am and the bodies were retrieved, packed in two Kia cargo trucks headed for the morgue.

When daylight appeared, the magnitude of the disaster became clear with bodies scattered around. As the search for missing family and friends intensified, businesses also began to count their losses.

Many of the dead bodies were retrieved from a nearby pharmacy shop. These victims, like those who died at the filling station, had taken shelter there during the rain but could not escape the blazing fire when the explosion occurred.

President John Mahama has already been to the scene of the incident and has expressed shock at the scale of the disaster, promising to ensure it does not occur again.