Floods: We must make sure this doesn't happen again - Mahama 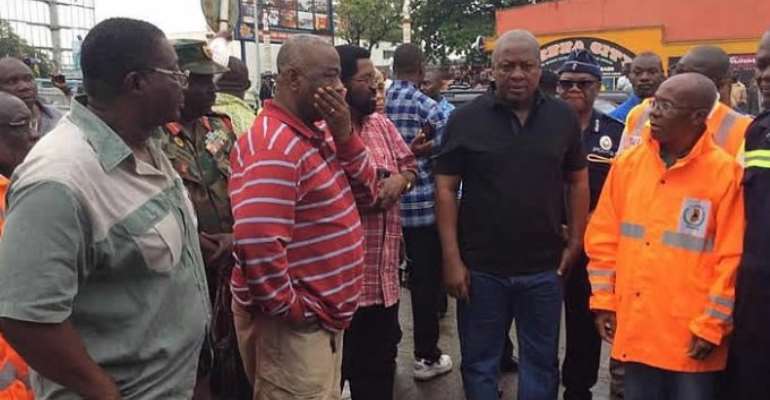 President John Mahama says practical steps must and will be taken to ensure that Wednesday’s disastrous floods and their attendant deaths does not occur again.

The practice of building in watercourses, he said, is largely to blame for the flooding situation in Accra and must be checked.

The president said this when toured the burnt Goil filling station near the Kwame Nkrumah Circle in Accra.

Close to a hundred people died in an explosion at the fuel station.

Many of the victims were seeking refuge there after floods resulting from hours of rain submerged large parts of the capital.

The president visited the ravaged Kwame Nkrumah Circle and stopped at the Goil filling station which has been reduced to ashes.

There were charred bodies, burnt vehicles, blood mixed with fuel residue in a chaotic scene.

He was there with the Mayor of Accra and the Member of Parliament for Klottey Korle, Nii Armah Ashittey.

“We have to take some measures to deal with this but a lot of times when the steps are drastic, you have people expressing sympathy,” he stated

“We must sit and strategise to make sure this doesn’t happen again,” President Mahama