President Mahama calls for release of land for development 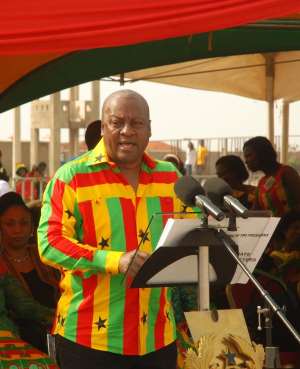 Doboro, June 3, GNA - President John Dramani Mahama on Wednesday called on Chiefs and Landlords to be flexible in the allocation of land for development projects in their areas.

He said the bad land tenure system that result in multiple sales of land was becoming inimical to the activities of investors and development in the country and therefore needed a shift to create enabling environment for businesses.

President Mahama said this when he inaugurated a new factory and the launch of three new products of Blue Skies Group at Doboro near Nsawam, in the Eastern Region.

The programme also attracted African Mayors, who are currently attending a summit in Accra, led by Nii Oko Vanderpuije, Mayor of Accra, Ministers of State, the clergy and the business community.

The Blue Skies Company was established in 1998 with the mission to advance health and well being by producing fresh-cut fruit and freshly squeezed juice in the world.

The group employs about 3,500 people and has factories in Ghana, Senegal, Egypt, South Africa, Brazil, and the United Kingdom, with supplies to retailers in Europe and Africa.

President Mahama said as part of government's transformational programme to promote made-in Ghana goods, government would create an environment that would become mouth-watering for investors.

He said government would in the coming days; re-launch the Made-in Ghana campaign to whip up the enthusiasm of Ghanaians, adding that, the success of the campaign would depend on the provision of litigation-free lands in the communities.

On availing Ghanaian products, President Mahama said government was revamping some of the defunct industries to produce quality and cheaper products into the Ghanaian market.

He mentioned the revamping of the GIHOC Shoe factory in Kumasi and the Komenda Sugar factory as some of the local industries that were saving the country a lot of money that would have been used in importing goods into the country.

President Mahama said government had for some years supported rice farmers, resulting in a 60 per cent reduction in rice importation and gave the assurance that the power challenges would be solved in the coming days to pave way for industries to flourish.

He said the company would continue to produce quality products to feed the nation and other markets in the world.

Dr Pile appealed to government to fix the electricity challenges to help them curtail the high cost of production.

Mr Jon Benjamin, the British High Commissioner to Ghana said the British government would continue to support Ghana to develop her economic potentials and called on other stakeholders to play their roles professionally to advance the Ghanaian economy.