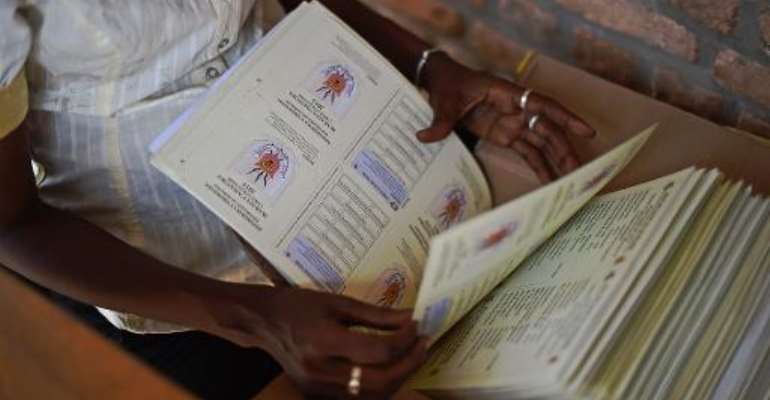 A woman sorts through cards ready to be collected by registered voters in Bujumbura on June 2, 2015. By Carl de Souza (AFP)

Bujumbura (Burundi) (AFP) - In a small school in Musaga, a district in Burundi's capital that has been at the heart of violent protests against President Pierre Nkurunziza's third term bid, electoral officials get few takers of voting cards they try to hand out.

The officials stand around, half-idle and half-nervous, a mirror image of the atmosphere on the streets outside, where the prospect of elections generate little enthusiasm and much trepidation.

If voter excitement can be measured by the amount of cards handed out, then there is clearly none. Though efforts to distribute more than 34,000 of the documents are nearly over, the boxes remain full.

It is now widely expected that parliamentary elections officially scheduled for Friday in the small central African nation will be delayed by at least a month -- in line with regional and international demands.

But a formal decision by the government, which has faced over a month of violent demonstrations and even a coup attempt, has yet to be made.

The embattled election commission, meanwhile, continues going through the motions.

"We hope we can still distribute the cards in time," said the local electoral commission head, Napoleon Nimbesha. Another election official, however, said he had only seen five people all morning come to collect their cards.

The lack of activity is hardly surprising. Many people in the neighbourhood are still afraid to venture into the streets, where the slightest gathering of people can prompt a quick police crackdown involving the use of live ammunition and tear gas.

Others have no interest in casting a ballot in an election in which their favoured candidates have been unable to campaign. And with independent media silenced during the fighting sparked by the May 13 coup attempt, many people have not even been informed voter cards are being handed out.

"People were not aware because the radios are not working," said an election official, who asked not to be named.

He even admitted to feeling distinctly uncomfortable and fearful of being viewed as an agent of the president -- a leader detested in this part of town by critics who say he is bending the rules, and intent on staying in power at any cost.

"Protesters could possibly prevent us from working," he said.

Nkurunziza, in office since 2005, was nominated by the ruling party in late April to stand for a third consecutive five-year term. Opponents say his candidacy is unconstitutional and also contrary to the 2006 Arusha peace deal that ended 13 years of civil war.

More than 30 people have since died in anti-Nkurunziza protests, although the demonstrations show no sign of abating.

Outside of the capital, some protesters have already switched to sabotage. The electoral commission has reported the destruction of ballot boxes, polling booths and ballot cards -- especially in the provinces of Rumonge in the south, Rural Bujumbura next to the capital and Mwaro in the centre.

Sitting in front of a shop along the main street of Musaga, Jean-Claude, a local resident, said he was disillusioned by the crisis.

"I'm not sure if I'll vote or not," he said, quickly adding that there was little chance "for transparent elections" to be held anyway.

Anatole Mahoro, another resident and one of the few who picked up his voting card, was more combative.

"If we really want to teach Nkurunziza a lesson, we should teach him a lesson in the elections," he said.