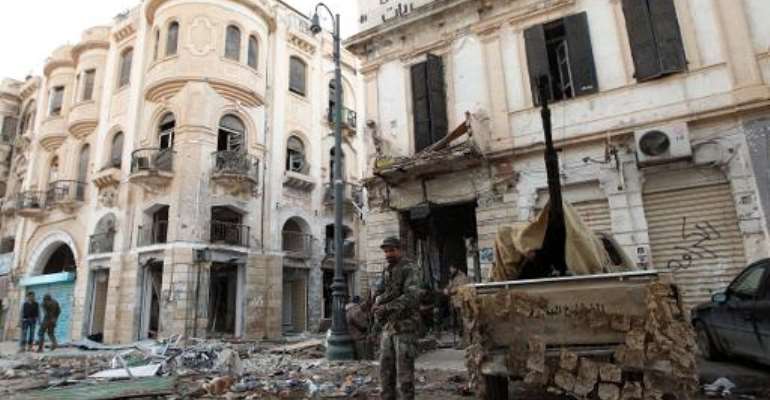 Soldiers loyal to Libya's internationally recognised government of Abdullah al-Thani and General Khalifa Haftar rest on a sidewalk in the eastern coastal city of Benghazi on February 28, 2015. By Abdullah Doma (AFP/File)

Doha (AFP) - The UN envoy for Libya said Tuesday, ahead of renewed peace talks, that there can be "no military solution" to the conflict in the country where rivals cannot "win a war."

Leon said he believed 75 per cent of political leaders in the strife-torn country wanted peace.

"I think we will see an opportunity (for peace)," he added. "Most groups are now supporting a political solution."

Three rounds of talks have so far taken place in North Africa, but failed to bring peace.

During April talks in Morocco, Leon and other negotiators said the groups were very close to an agreement on a draft proposal to form a national unity government that would serve for a maximum of two years.

Despite Leon's guarded optimism, the talks take place against a backdrop of increasing fears over the influence of the Islamic State.

On Monday, Libya's internationally recognised government called for outside help against military advances in the country by the jihadist group and warned of an Iraq-like scenario.

Libya plunged into chaos after the 2011 NATO-backed uprising that toppled and killed Kadhafi, with battle-hardened and heavily armed former rebels carving out their own fiefdoms across the country.