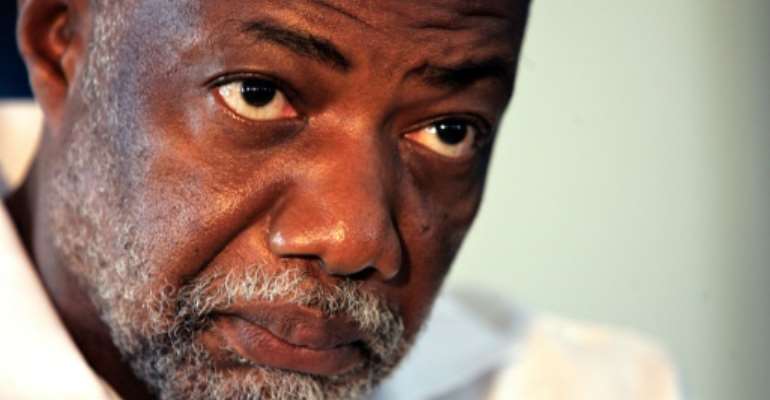 Chairman of Liberia's ruling Unity Party Varney Sherman was arrested following allegations that he orchestrated a vast political patronage network based on bribery on behalf of London-based Sable Mining. By Olivier Laban-Mattei (AFP/File)

Sherman was arrested on Wednesday following allegations by campaign group Global Witness that he orchestrated a vast political patronage network based on bribery on behalf of the firm.

Sherman was the Liberian legal fixer for Sable, co-founded by former England international cricketer Phil Edmonds, between 2010 and 2012, as it sought to gain a foothold in the country's lucrative iron ore industry.

Often described as Liberia's best connected lawyer, Sherman was taken in by police after young party activists blockaded his home on Monday when officers attempted to raid it.

"He was arrested early this morning at his residence because he refused to cooperate with the taskforce set up by the president," a security source told AFP.

Global Witness referred in their report to a fourth man charged, Chris Onunuga (also spelled Onanuga), as a fixer for Delta Mining, a South African firm which Sable bought into in 2010.

Sherman has denied the allegations and has said he will refuse to co-operate with an anti-grift taskforce set up by President Ellen Johnson Sirleaf, who has herself faced criticism for alleged nepotism and corruption.

The party chairman is accused of channelling handouts and inserting favourable representatives to key posts with responsibility for licences and tenders over Liberia's iron ore concessions.

Campaign group Global Witness, which first made the accusations earlier this month, said Sable's bribes, alleged to have mostly been paid out by Sherman, total $960,000 (860,000 euros).

Speaker Tyler "helped to get the Sable-friendly legislation through parliament", the Global Witness report alleged, with changes that included relaxing laws on the tender process.

He recently resigned from the ruling party and is believed to have presidential ambitions.

Tyler is listed as receiving a bribe worth $75,000 in the report.

Police had gathered outside Tyler's home on Wednesday morning. "The Speaker of the House will soon join him (Sherman) in court," the source added.

Sable Mining has said the Global Witness report was based on "unreliable testimony" from former business partners.

Edmonds, who resigned as chairman of the firm in 2014, along with Andrew Groves, the current CEO, "strenuously deny any wrongdoing," they said in a statement released after the report was published.

Sable has since refused to answer calls for comment by AFP.