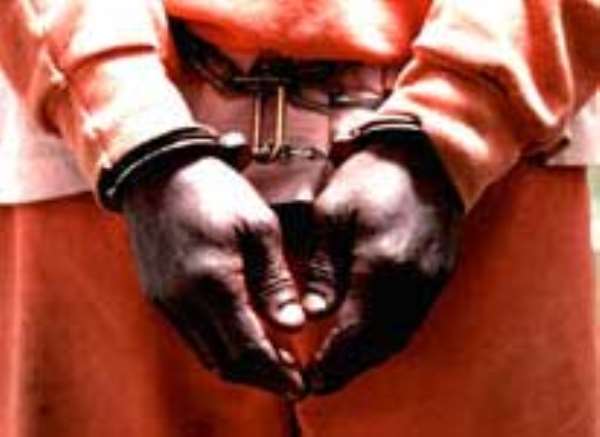 Accra, Aug. 30, GNA - A 23-year old motor repairer on Monday feigned madness in the Cocoa Affairs Circuit Court cells when he stripped himself naked, poured a bucket full of urine on his body and banged his head on cell's metal gate.

Adamu Damalei had been remanded by a circuit court for pouring hot water on two ladies after one had turned down his love proposal and the other who intervened to make peace.

He pleaded not guilty to two counts of causing unlawful harm. The Court, however, remanded him to reappear on September 13. Damalei, who was waiting to be sent to the James Fort Prison begun screaming: "My father is a chief," "My father has a lot of money, Do you know me, I am mad, I won't go anywhere."

The Police had a hectic time handcuffing him as he struggled, his body slippery with urine and its stench.

He was, however, over-powered and taken to the James Fort Prison. The case for the prosecution was that the two complainants were tea sellers.

Damalei was offended and sent emissaries to Ms Aggrey to inform her that he would subject her to beating whenever he met her. The prosecution said on August 23, this year, at about 22 hours, Ms Babie Ramatu Abdul-Wahab, the second complainant sent Ms Aggrey to purchase onions and on her return met Damalei, who threatened to beat her for no reason.

Damalei later chased Ms Agrrey to a spot where she sold her tea. The prosecution said Damalei picked a quarrel with her and threatened to pour the hot water she was using to prepare the tea on her. Babie who was at the scene decided to intervene but Damalie hurriedly took the boiling water and poured it on the two women.

The women suffered severe burns on their faces, breasts and other parts of their bodies and were rushed to the Ridge Hospital where they were still receiving treatment as out patients.

On August 24, this year, family members of the two complainants apprehended Damalie and handed him to the Police.