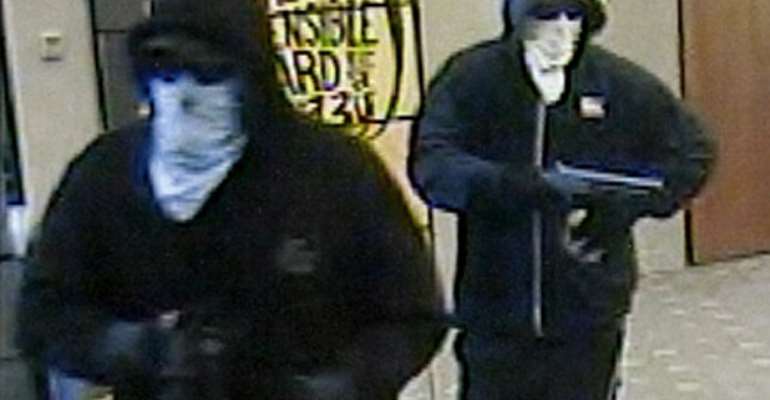 Alhaji Ibrahim being held by a police officer.

A Bekwai circuit court has sentenced a 30-year-old man to 25 years' imprisonment for carrying out a gunpoint robbery with his gang at Manso-Antoakrom in the Amansie West District of the Ashanti Region.

Alhaji Ibrahim, a miner, and his two accomplices currently at large, attacked two Chinese nationals and a Ghanaian lady with locally made pistols and managed to dispossess them of GH¢1,000 cash and mobile phones valued at GH¢600. The incident happened on July 21, 2014.

He was convicted after the court found him guilty on one count of robbery, contrary to section 149 of Act 29/60, after a year's trial.

Police prosecutor, Detective Inspector Stephen Ofori, earlier informed the court that the complainant in the case, Stephen Brenya, was a farmer and resident of Manso-Antoakrom.

The convict, on the other hand, was a miner and lived at Manso Akropong in the same Amansie West District.

According to him, on July 21, 2014 at about 11:20 am, Ibrahim, while in the company of two other people, attacked one Meng Yun, Li Daoxi and Jennifer Tutu at their residence on the outskirts of Manso-Antoakrom and robbed them of their mobile phones valued at GH¢ 600, and GH¢ 1,000 cash at gunpoint.

Prosecution said the robbers marched the victims to their room before taking away the cash sum and their mobile phones.

Inspector Ofori narrated that the robbers, in the process, caused injury to one of the Chinese nationals for being uncooperative, resulting in a deep cut on his head.

Prosecution stated that Jennifer Tutu, who hails from the community, sent information about the robbery around.

He said the complainant, who got wind of it, spotted the convict and alerted the police, leading to Alhaji Ibrahim's arrest at his hideout.

He was later paraded and the victims identified him as one of the people who attacked them. Ibrahim was charged with the offence and subsequently arraigned for prosecution.