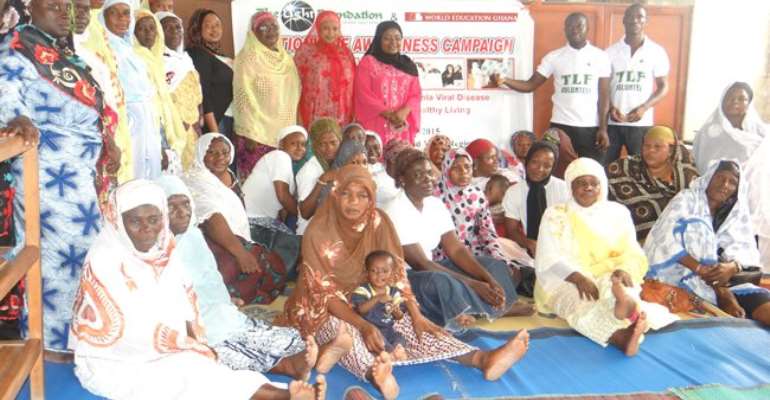 A collaboration between The Light Foundation, Ghana (TLF) and the World Education Ghana is underway to get 5,000 Muslims within some selected Zongo Communities located within the Greater Accra and Volta Regions sensitized on the deadly Ebola Virus Disease in Ghana.

The move which is aimed at stopping at nothing to get rid of the deadly virus, inculcate the practice of ensuring good hygiene among the residents living within the selected Zongo Communities is on the theme: “Embrace hygiene and Say no to Ebola”

Strategies earmarked by TLF Ghana to achieve desired result under the project includes; strengthening the capacity of Imams and other stakeholders to implement Mosque-based Ebola prevention sermons using the audio material, encouraging Imams and MBC members to play audio material before and after spiritual activities and to gather and reach out to Muslim groups and women groups in selected communities.

The on-going exercise has already gained ground within some Zongo Communities situated in the Ayawaso East and West Constituencies in the Greater Accra Region.

At the Kardor Mosque, located in Nima under the Ayawaso East, a women’s group known as Nasiyil Rawdatul, were among several groups taken through basic steps of Ebola prevention, and Cholera with emphasis on maintaining clean environment and proper hygiene.

The group members were also introduced to hand washing to serve as a tool to guard against diseases and to promote good personal hygiene practice for healthy living.

In addition to the meaningful presentations on Ebola prevention, each participant received audio CD containing messages in Hausa language to serve as a guide in their homes.

Among the participants includes Peer Educators from different focus groups who previously got trained in a separate forum organized by The Light Foundation, Ghana as part of its thirty-six weeks (36) Nationwide Ebola Campaign Program of getting rid of the deadly Ebola Virus Disease from entering into Ghana.

The Leader of Nasiyil Rawdatul group, Hajia Fatmatu Mohammed Watara, popularly known as Hajia Dangana, commended TLF Ghana and The World Education Ghana for the sensitization campaign initiative which has “opened their eyes to the light in a darkened world”.

“Such a wonderful overture should be replicated across the whole Ghana so that people will know the truth about life.” she said.

She also pledged her outfit’s support in reaching the populace with the good message, calling on her group members to reflect the measures and the right attitude to a healthy lifestyle they acquired through the training program.

A section of Muslim brothers at the Alhaji Norgah Central Mosque

The Programme Manager of TLF Ghana, Hawa Suleimana Issah, said getting rid of Ebola from Ghana at all cost is the greatest objective of The Light Foundation Ghana.

She said: “It is crucial for people to live in good health at all times, hence the need for the sensitization exercise on the practice of good hygiene, adoption and promotion of the proper healthy life style which is paramount and key to healthy living.”

TLF Ghana is a not-for profit Organization spearheading the Nationwide Ebola Awareness Campaign in Ghana, committed to getting rid of Ebola from Ghana through active campaign in six regions namely Greater Accra, Western, Eastern, Central, Tamale and Upper East Region which saw most people sensitized on the prevention of the disease including those leaving within the “risky zones”.