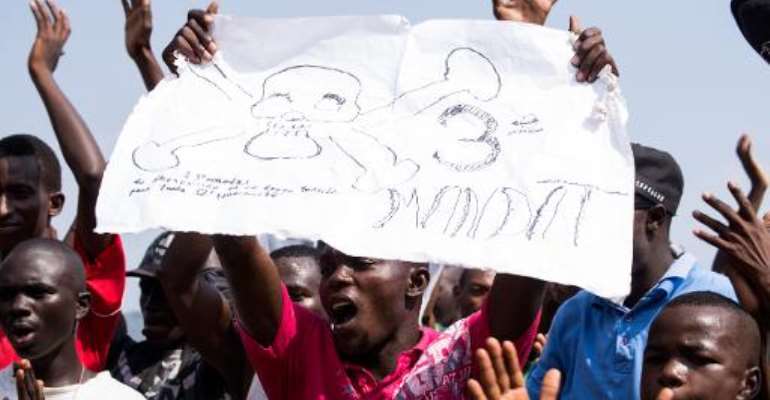 Dar es Salaam (AFP) - Elections in Burundi should be delayed by at least a month and a half and all violence must stop, East African leaders said Sunday after a summit on the crisis.

"The summit, concerned at the impasse in Burundi, strongly calls for a long postponement of the elections not less than a month and a half," the East African Community (EAC) said in a statement read out by its secretary general, Richard Sezibera, after a meeting of regional leaders in Tanzania.

The statement called "on all parties to stop violence," for the "disarmament of all armed youth groups" and for "the creation of conditions for the return of refugees" who have fled weeks of political violence.

The crisis in Burundi erupted after the ruling party designated President Pierre Nkurunziza as its candidate for upcoming elections and for a third consecutive five-year term in office, something that opposition and rights groups say violates the constitution as well as a 2006 peace deal that ended a 13-year civil war.

Burundi's government has insisted that parliamentary elections will take place on June 5 despite weeks of civil unrest on the streets of the capital and nearby provinces that has left at least 30 people dead. The presidential elections are scheduled for June 26.

The summit has been seen as an important opportunity to resolve the crisis, with talks between Nkurunziza's camp and the Burundian opposition deadlocked.

However the leaders stopped short of telling the president to back down, only calling for a "return to the constitutional order" in Burundi.

The Burundian president, however, failed to turn up: his spokesman said he instead will be pushing ahead with a controversial re-election campaign that has sparked weeks of deadly civil unrest and a regional refugee crisis.

It was during a first crisis meeting on May 13 in Tanzania's economic capital, attended by Nkurunziza, that a top general launched an unsuccessful bid to oust him -- and the president is also seen as being wary of again leaving the country.

The EAC which groups Kenya, Rwanda, Tanzania and Uganda as well as Burundi. Rwandan President Paul Kagame, a key regional player and Burundi's neighbour, did not attend and sent a minister to represent him. South African President Jacob Zuma also joined the talks.

15 Assembly Members, others granted bail for cursing Regiona...
23 minutes ago

I wanted to turn down Accra Regional Minister job because I ...
29 minutes ago