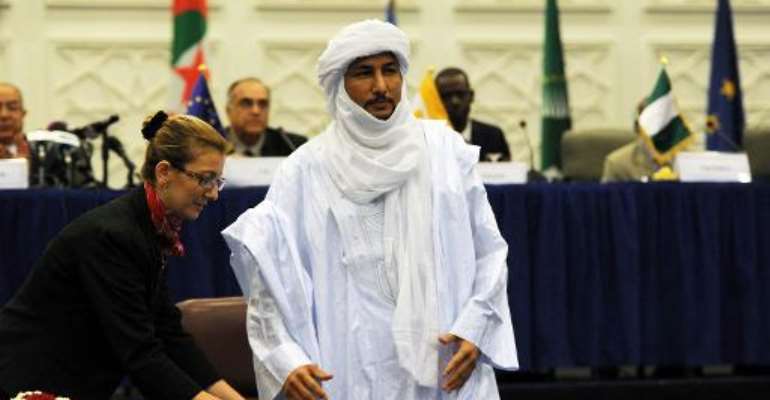 Algiers (AFP) - The head of Mali's main Tuareg-led rebel groups on Sunday said he was convinced that consultations underway in Algeria to finalise a peace agreement with the Bamako government would bear fruit.

"We remain convinced that efforts and discussions underway in Algeria will be successful," said Bilal Ag Cherif, who heads the Coordination of Azawad Movements (CMA), the APS news agency reported.

His group initialed a peace agreement with the Malian government in Algiers on May 14, but demanded changes before signing a final deal to end decades of conflict in the west African nation.

The agreement itself was signed the following day in Bamako by the government of Mali and several armed groups, at a ceremony attended by numerous heads-of-state but spurned by the CMA.

The so-called "Algiers Accord" aims to bring stability to northern Mali, cradle of several Tuareg uprisings since the 1960s and a stronghold for jihadists linked to Al-Qaeda.

The international community has been increasing pressure on the CMA to sign the agreement in an effort to isolate the jihadists.

Cherif, speaking after meeting Algerian Foreign Minister Ramtane Lamamra, said efforts underway "will enable all the parties to finalise the agreement which is the base for stability, peace, justice and development in Mali."

"We are now in Algeria... to put the finishing touches to the agreement," he added.

The CMA has said it will not accept a deal without an amendment recognising "Azawad", the name used by the Tuareg for the northern part of Mali, as a "geographic, political and juridical entity".

The Algiers Accord calls for the creation of elected regional assemblies but not autonomy or federalism, in deference to government concerns of separatism.

Mali was shaken by a coup in 2012 which cleared the way for Tuareg separatists to seize the towns and cities of the vast northern desert.

Al-Qaeda-linked militants then overpowered the Tuareg, seizing control of northern Mali for nearly 10 months until they were ousted in a French-led military offensive.

But Mali remains deeply divided, with the Tuareg and Arab populations of the north accusing sub-Saharan ethnic groups in the more prosperous south of marginalising them.

Northern Mali has seen an upsurge in attacks by pro-government militias and various factions of the Tuareg-led rebellion, leaving many dead on both sides.