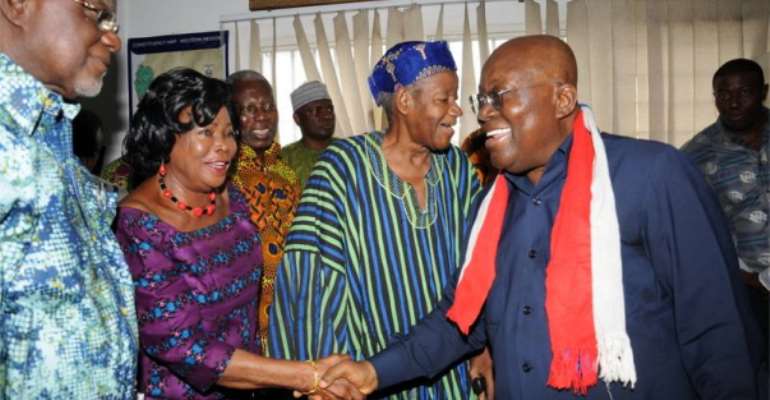 Flagbearer and leader of the New Patriotic Party (NPP), Nana Addo Dankwa Akufo-Addo, has condemned the unhealthy internal strife that has engulfed the party, threatening its very foundation and unity.

For him, 'There is absolutely nothing to be gained from internal recriminations within the NPP except to provide fertile soil for our opponents.'

Nana's ceasefire address follows the level of apprehension that has beset the party since the cold-blooded murder of the party's Upper East Regional Chairman, Adams Mahama, last week.

There has since been calls for National Chairman Paul Afoko and General Secretary Kwabena Agyepong to step aside, for it is believed that they are contributory factors to the disunity in the party.

Paul Afoko's brother, Gregory Afoko, has been arrested as a prime suspect in the killing of Adams Mahama.

Anger
At a press conference at the party's Asylum Down headquarters yesterday, Nana Akufo-Addo told the rank and file of the party that 'It is unseemly and disrespectful towards the memory of Chairman Adams that such loud noises should continue within the party, whilst we are still in the official mourning period.'

Even though some national executives of the party were not present, the absence of under-pressure National Chairman and the General Secretary raised eyebrows since sources said they had been given prior notice of the event.

Afoko later claimed on various radio stations through text messages that they were not invited, thereby creating a new buzz of confusion in the party.

DAILY GUIDE learnt that the embattled two national officers were informed about the event Thursday night and again yesterday morning but they said they were still in Kumasi.

Access To Offices
Addressing the media, Nana Akufo-Addo insisted that 'A certain amount of outburst induced by the tragedy (Adams' death) is understandable because of the extreme nature of the tragedy, but that should not mean that NPP members should behave out of character.'

Until the party's governing bodies meet to decide the fate of the party in the face of the seeming crisis, the NPP flagbearer asked that cool heads are made to prevail.

'This means, for instance, that the officers of the party, the National Chairman and the General Secretary in particular, must have access to their offices at party headquarters and not be hindered in any way from being able to conduct their duties,' he declared.

'The NPP way of doing things is to be guided by law and order and I ask that normalcy return to our headquarters and party offices,' the standard bearer entreated.

Going forward, the NPP leader said, 'I ask that we extend mutual respect to each other and we listen to each other. I will not tolerate chaos within our party. The recriminations against ourselves in this period of healing, I repeat, must stop.'

That, he said, was because 'The NPP is not the first party to face crisis; and the NPP will not be the last party to come out of its crisis stronger…I am confident of our capacity to overcome and we shall overcome.'

Disappointment
Since the tragedy, Nana Akufo-Addo acknowledged the fact that 'there has been an outbreak of a cacophony of voices within our party' with many cries by party loyalists and supporters and a sense of despair felt by many, which had been demonstrated in various ways led by the nine surviving regional chairmen followed by other important, identifiable groups and individuals within the party.

Even in his grief, Nana Addo revealed, 'I have been listening to many people and taking on board the controversies and sentiments that have been generated. It is my responsibility as flagbearer to listen and, then, seek to do what is in the best interest of our party.'

He continued: 'Having heard so many people, my first call on all party members and supporters is to cease fire. The finger-pointing, the name-calling, the insults, the lies, the denigrating of past and current leaders must stop.'

He condemned attacks on former President John Agyekum Kufuor who he described as 'an icon of our party and nation, whose legacy we in the NPP must jealously guard.'

He was optimistic that these bodies would, as he put it, 'act in the collective interest of the party.'

Charge
While he lauded the level of professionalism displayed by the security agents over the killing of the late Adams Mahama, Nana Addo said, 'We expect them to continue to do so and not to be influenced in any way by political pressure of any sort.'

He, however, could not fathom what had become of the shooting and killing of the Nkwanta South DCE some six months ago, saying, 'It does not engender public confidence that up to today, there has been no word on the investigations into that crime.'

In view of that, the 2016 flagbearer of the NPP noted with emphasis, 'We shall not be satisfied with anything less than the arrest and successful prosecution of the killers of Chairman Adams,' adding that 'There should be no ifs and buts.'


Fasting and Prayers
Nana Akufo-Addo also joined calls by NPP National Women Organiser, Otiko Djaba, for a period of fasting and prayers for the party which takes effect from this Sunday at the party headquarters.

'I have no doubt that with the help of Almighty God and by our collective determination, the storms that are currently buffeting the great, historic movement that the NPP represents will soon subside so that it can fulfill its mission of developing our nation in freedom,' he assured, leaving the rank and file of the party with a Bible verse: Psalm 122 verse 6-8.

Meanwhile, former President Kufuor has added his voice to calls for calm to prevail in the NPP.

In a statement signed by his special aide, Frank Agyekum, he expressed sadness and deep worry over happenings in the party following the death of Alhaji Adams Mahama.

Kufuor's Message
President Kufuor, who had been abroad over the period because of prior-arranged engagements, reiterated the need for calm and circumspection in the affairs of the party.

He cautioned party members against acrimonious accusations in the media which only serve to further divide their ranks and allow their detractors to infiltrate them.

According to Mr Kufuor, the NPP needs to unite not only for its own good, but for that of the entire nation that is looking up to it (party) as the alternative government.

Of particular concern to him was the fact that issues that must be resolved in accordance with laid down procedures of the party's constitution were constantly being discussed in the media without regard to the overall effect on its fortunes.

He has therefore urged that the painful and untimely passing away of Alhaji Mahama should be used to unite the party and not tear it apart.

He further appealed that the national investigative system that has already taken charge of the process be allowed to work rather than the party seeming to preempt the outcome.

Latest Photo Reports
Catch up with all the political quotes from our politicians.
Advertise here
More NPP News
ModernGhana Links
It's either we change leadership in Ashanti or we forget 2024 — NPP Delegates advised
"Greater Accra NPP is poised to recapture all lost seats in 2024" — Chairman Divine
With TESCON, nothing can stop NPP from 'breaking the eight' – Kwadaso MP
NPP flagbearership: I’m experienced now, I will contest for flagbearer in 2023 – Boakye Agyarko
We lost 32 seats in 2020 election; let’s work extra hard to break the 8 – Boakye Agyarko
NPP’s boycott of 1992 parliamentary elections was a ‘mistake’ – Hackman Owusu Agyeman
Don’t trust Mahama; he’s lost touch with reality – NPP to Ghanaians
Your unnecessary thank you tour full of lies, outrageous comments — Former NPP Organiser tells Mahama
People want to kick out arrogant Wontumi, so we will not allow him go unopposed — Adiza Zongo Pioneer
TOP STORIES