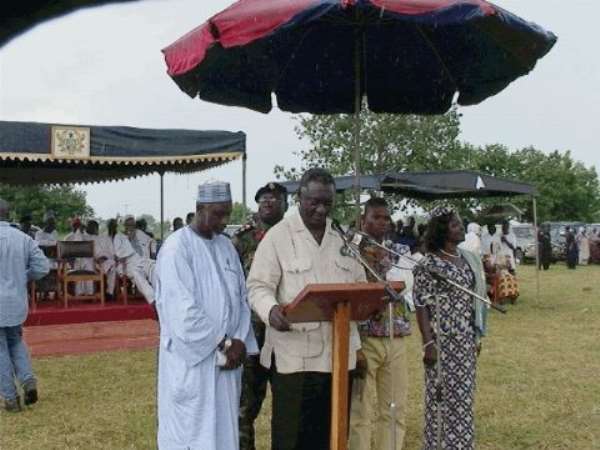 President John Agyekum Kufuor who announced this explained that this was the result of the government's ability to reach the Completion Point under the HIPC Initiative in a record time coupled with the government's prudent fiscal and monetary policies.

He was addressing a durbar of the chiefs and people of the Asuogyaman District in the Eastern Region on the second day of his four-day official visit to the region.

The chiefs and people of the Akwamu, Anum and Boso traditional areas attended the durbar.

President Kufuor described the adoption of the HIPC Initiative as "a wise and bold but difficult decision, which in the long run, had been very beneficial to the country."

Responding to an appeal for the payment of compensation over the inundation of their lands following the construction of the Akosombo Dam, President Kufuor said the Attorney General's Department would be directed to investigate the issue and report to the government to take the appropriate action.

He said the district was in a strategic zone of the country and appealed to the chiefs and people in the area to help end chieftaincy disputes that had affected the development of the area. President Kufuor asked the traditional councils to take advantage of the President's Commission on Chieftaincy to resolve their disputes for peace to prevail.

In reaction to a suggestion by the chiefs that a training institution for chiefs should be set up in the country, President Kufuor said the traditional customary rites for the confinement of a chief before enstoolment was ideal to prepare any prospective chief adequately for the task ahead.

However, President Kufuor said an induction course like the ones for parliamentarians and other elected persons for at least two months would be appropriate to prepare the individual for the job assigned to him or her.

He said the National House of Chiefs could also be involved in such a training venture to provide some tutorials for newly-enstooled and enskinned chiefs.

Nana Ansah Nyampong, a spokesman for the chiefs, commended the government for the establishment of peace in the country. He said a major problem facing the youth in the areas was their inability to continue with their education to the tertiary level and appealed for the improvement of educational institutions in the area. Nana Nyampong appealed to the government to help solve the many "hydra-headed" chieftaincy disputes that had bedeviled the people and was affecting development.

"Some of the disputes have been in existence for the past 25 years" he said.

Nana Nyampong appealed to the government to review the Volta River Project Act, which made the Akosombo an autonomous community thereby denying the District Assembly of the needed revenue.

He expressed concern that the appropriate compensation to the people over the acquisition of their lands for the construction of the Akosombo Dam had not been paid and appealed to the government to ensure that the stools that provided the land were compensated well.

The people suggested that should the government find the amount of compensation too huge it could be floated into bonds and shares in major companies for the benefit of the people and the future generation.